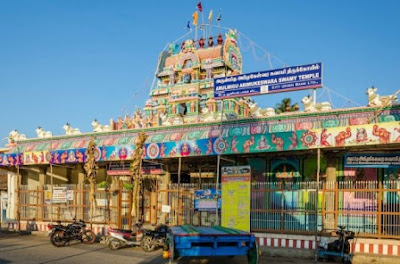 Abhimukeswarar Temple is a Hindu Temple dedicated to Lord Shiva located in Kumbakonam Town in Thanjavur District in Tamil Nadu. Presiding Deity is called as Abhimukeswarar and Mother is called as Amirthavalli. The temple is one of 12 Shiva temples connected with the Mahamaham festival, which takes place in Kumbakonam every 12 years. This temple is located on the eastern bank of the Mahamaham Tank, Kumbakonam.The temple is important place for Thula Rasi people.

Legend has it that the Lord Shiva was facing east earlier and only when Mahamaham started, the Navakanniga rivers including Ganges and others requested that they would like to have a glimpse of the Lord from Mahamaha Kulam, the Lord acceded to the request and turned towards west.Thus, the Lord is facing West and came to be known as Abhimukeswarar.

Sumathi Got Cured of Leprosy here

A beautiful girl child was born to Sudhaban, a brahmin from Kashmir and his wife Seelavathi and they named her as Sumathi. When she approached marriageable age, due to her karma, was inflicted by Leprosy. The people around thus despised Sumathi and the parents were worried and prayed to Lord Siva fervently for the wellbeing of their daughter. Sage Naradha came in their dreams and told they had to go and take bath in Mahamahakulam during Masi Magam and pray to Abhimukeswarar for the cure of the illness of Sumathi. The couple did as told by Sage Naradha and Sumathi was cured of her illness. That night, Lord Siva came in the dream of Sudhaban and told to conduct the marriage of Sumathi before him and live for some time and they would reach Kailasa.

The temple is believed to be 1000 years old. It is believed that Govinda Deekshitar, the minister of Achutha Nayakkar of Thanjavur, renovated the temple during the 16th century.The last consecration of the temple was held on 26 October 2015.
This is a small west facing Temple with a two-tiered Rajagopuram.The Temple is situated on the eastern bank of the Mahamaham Tank. The Entrance is facing the west side. Presiding Deity is called as Abhimukeswarar. He is housed in the sanctum in the form of Lingam. He is facing west. It is noteworthy that the Dwara Palakas (security men) in Lord Abi Mukheswarar shrine are in dancing posture as Lord Nataraja.
On the outer wall on the northern side is Brahma and on the east is Lingothbhavar and on the south beautiful idol of Dakshinamurthy blesses the devotees. Lord Yoga Dakshinamurthy appears in a sitting posture with one leg kneeled down. He looked different compared to other temples his head was slightly bent. Mother is called as Amirthavalli. She is housed in a separate shrine. Her shrine is situated on the right side of the sanctum.
The Navagrahas are on the small Peetam. Sani Bhagawan of this temple is taller than the other 8 planets in the Navagraha shrine. The idol of Lord Bhairava has special importance in the temple. He is taller than the Bhairavas in the 12 Maha Magam temples.There are also shrines for Ganesha and Hanuman in the temple premises.The sacred tree of this temple is Gooseberry.

The Temple is praised as a place of solution to any disease. People offer gooseberry to Lord for a healthy life.Those facing adverse aspects of Sani Bhagawan and other planets pray here. Devotees light ghee lamps in the shrine of Sani Bhagawan as a prayer commitment. The faith is that adverse aspects of Planet Sani Bhagawan and that of other planets too would be neutralized if they pray here and light Dhil Oil lamps in the shrine on Saturdays. Mother Amirthavalli is all merciful granting boons to devotees.

How to Reach Abimukeswarar Temple Kumbakonam?