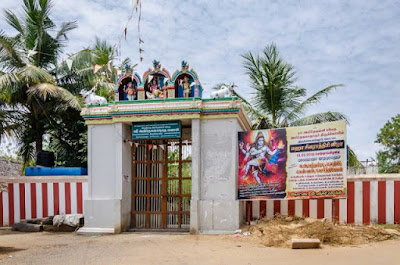 Amirthakateshwarar Temple is a Hindu Temple dedicated to Lord Shiva located in Sakkottai, a village in the outskirts of Kumbakonam, in Thanjavur District in Tamil Nadu. Presiding Deity is called as Amirtha Kalasa Nathar / Amirthakadeswarar and Mother is called as Amirthavalli. This temple is situated on the southern bank of the river Arasalaru. This Temple is one of the twelve famous Shiva temples in and around Kumbakonam participate in the famous Maha Maham festival. This is one of the Saptha Sthana temples associated with Adhi Kumbeswarar Temple,Kumbakonam.
The presiding deity is revered in the 7th century Tamil Saiva canonical work, the Thevaram, written by Tamil saint poets known as the Nayanmars and classified as Paadal Petra Sthalam. Sundarar venerated Amirthakateshwarar in Thevaram, compiled as the Seventh Thirumurai. This is the 185th Devaram Paadal Petra Shiva Sthalam and 68th Sthalam on the south side of river Cauvery in Chozha Nadu. The temple is closely associated with Sakya Nayanmar, one of 63 saints associated with Saivism. The temple is maintained and administered by the Hindu Religious and Charitable Endowments Department of the Government of Tamil Nadu.

According to Hindu mythology, at the end of every Yuga, there is a huge flood called Maha Pralayam occurs and the whole world immerses in a deluge on account of the wrath of Hindu god Shiva for the sins committed by humans in earth. Lord Brahma prepared himself for the next cycle of creation. He put all the seeds from which creation would sprout in amrita (the elixir of immortality) along with four Vedas and Puranas and kept them together in a clay pot. On top of the pot, he placed a coconut with mango leaves and wrapping around the pot’s neck a sacred thread. He then placed the pot on the peak of Mount Meru in the Himalayas.
When the Maha Pralayam started, it destroyed all living creatures on the earth. The Amutha Kalasa also got displaced and started floating on the seas for years. Eventually when the Pralayam stopped, the Kalasa settled in Kumbakonam. Then Lord Shiva took the form of a hunter (Kirata Murthy) and split open the pot with his arrow. The life on earth started flourishing again. It is believed that when Lord Shiva opened the pot with his arrow, the pot broke and fell in various places across the earth. Each of these items became Shiva Lingas and temple has been established later.

Another legend states that Nayanmar saint Sakya was a staunch devotee of Shiva. He used to wear in Sakya style, which was not typical of Saivism. He used to worship Shiva at this place and even did puja for a stone he crossed. In his devotion, he used to forget that he was adorning the image of Shiva with stones instead of flowers. One day he forgot to do his austerities and started consuming food. He suddenly realized his mistake and ran to the place where he usually worships Shiva to find stones from Kailash started falling at his feet, with Shiva and Parvathy appearing before him. It is believed that as Sakya worshipped Shiva here, the place used to be called Sakkottai.

Sambandar in his works in Thevaram mentions that this place was originally occupied by Buddhists (Sakkiyar) and hence it came to be known as Sakkiyar Kottai, which with time became Sakkottai.

It is believed that Goddess Parvathy performed penance here. Pleased with her penance, it is believed that Lord Shiva married her. In the first stanza of his hymn, Saint Sundarar mentions this legend. There is a shrine dedicated to her in the name of Thapas Amman in the corridor.

Lord Brahma, Sundaramurthy Nayanmar and Sakkiya Nayanmar have also worshiped the lord of this temple.

This temple is also referred to as Kottai Shiva temple. It is believed that earlier this temple was surrounded by a big fortress with tanks (Akazhi) around it. The Akazhi was on both sides of the wall of the fortress. However, only the ruins of the wall and the tank can be seen. In his hymn, Saint Sundaramurthy Nayanar sings about the glory and grandeur of this fort, its halls, this temple and its tanks. It is believed that a lot of Sakkiyas (Buddhist) used to reside here. Hence this place gets the name Sakkiya Kottai which has later been changed to Sakkottai.
This temple was built in granite by the Cholas. Later it was renovated by the Chola King Kulothunga-III and the later expansions are attributed to Thanjavur Nayaks. The Kumbabhishekam of the temple was held on 22 October 2015. This temple is under the administrative control of the Hindu Religious and Charitable Endowments Department of Government of Tamil Nadu (HR&CE).
This east facing temple has a single corridor and its main entrance is without tiers. There is a beautiful sculpture depicting Lord Shiva and Goddess Parvathy flanked by Lord Murugan and Vinayaga in the entrance arch. However, it has a 3-tiered tower at the second entrance. The temple has a moat both inside and outside its surrounding walls. The present masonry structure was built during the Chola dynasty in the 9th century, while later expansions are attributed to Thanjavur Nayaks.
The front hall (Mandapam) of this temple is designed to look like the forehead of a bat (Vovval Nethi Mandapam). Sculptures of Lord Shiva and Goddess Parvathy in wedding form can be seen in this Mandapam. The front hall houses the Nandi and Bali Peeta. Presiding Deity is called as Amirtha Kalasa Nathar / Amirthakadeswarar. He is housed in the sanctum in the form of Lingam. He is facing east. Lord Shiva in this temple is a Swayambumurthi (self-manifested).
Arthanareeswarar, Dakshinamurthy, Lingothbhava, Brahma and Durga are the Koshta Idols located around the sanctum walls. The idol of Dakshinamurthy here is different when compared to the postures seen in other Shiva temples. It is depicted with four hands – the upper right holding a bead made of Rudraksha, the upper left holding Agni (fire), the lower right holding Chinmudra and lower left holding palm leaves. There is also a halo around his head (Surya Prabhai). The Kallala tree (Peepal) behind him is also very big.
The idol of Lingothbhavar looks very beautiful and it is made out of green colour stone. Lingodbhava is situated behind the sanctum sanctorum, on either sides of Lord Lingothbhavar, there are idols of Lord Mahavishnu and Lord Brahma in a worshipping posture. Devotees can enjoy the darshan of all the three lords (Trimurthys) – Brahma, Vishnu and Shiva. This is considered to be very auspicious. The image of Ardhanarishvara is depicted with his right leg in relaxing posture. Chandikeswarar Shrine can be seen in his usual location.
Mother is called as Amirthavalli. She is housed in a separate south facing shrine. Her shrine is situated in the north of Maha Mandapam. North of the Maha Mandapam are the shrines of Lord Dhandapani (Muruga in a small size) and Lord Nardana Vinayaka on the south. There is a separate shrine in the name of Thapas Amman in the corridor. (Thapas means penance in Tamil). The Thapas Amman is standing on her right leg, her left leg is bent, her right hand is placed on her head and her left hand on her stomach. This is a beautiful posture of penance.
There is a Saptamatrikas sculpted in a single panel and image of Tapsvi Amman. There are shrines for Naalvar, Navagrahas, Vayu lingam, Prithvi lingam, Theyu lingam, Lord Murugan with his consorts Valli & Deivanai, Gajalakshmi, Bhairavar, Bikshadana, Chandra, Suryan, Saneeswarar, Rahu and Sage Sakkiya Nayanar can be seen in the main hall and corridors. The temple tank associated with it is called Chaturveda Theertham (Naalveda Theertham). Sthala Vriksham is Vanni Tree.

People pray for various wishes. Devotees offer abishek, vastras to Lord and Mother and contribute for the renovation of the temple.