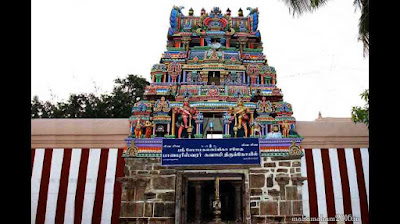 Banapuriswarar Temple is a Hindu Temple dedicated to Lord Shiva located in Kumbakonam Town in Thanjavur District in Tamil Nadu. Presiding Deity is called as Banapuriswarar / Somanathar and Mother is called as Soma Kamalambal / Kamalambigai.The temple is one of 12 Shiva temples connected with the Mahamaham festival, which takes place in Kumbakonam every 12 years.

Once, Sage Vyasa was cursed by Nandi Deva. As per the advice of Lord Vishnu, Sage Vyasa installed a Linga and worshipped Lord Shiva here to get rid of his curse. Linga installed by Sage Vyasa can be found in the prakaram.

King of Vanga Desa (now Bengal) worshipped Lord Shiva here for curing his wife Gandhimathi suffering from a prolonged illness, as advised by Sage Soodha. He also did some renovations in the temple. He was blessed with children too.

The Temple is believed to be built during 6th Century AD.The last consecration of the temple was held on 26 October 2015. This temple is under the administrative control of the Hindu Religious and Charitable Endowments Department of Government of Tamil Nadu (HR & CE).
The Temple is facing east with three tired Rajagopuram. The Sanctum Sanctorum consists of Mahamandapam, Artha Mandapam and Sanctum. Presiding Deity is called as Banapuriswarar / Somanathar and is facing east. He is housed in the sanctum in the form of Lingam. He is facing east. Vinayaga, Dakshinamoorthy, Arthanareeswarar, Brahma and Durga are the Koshta Idols located around the sanctum walls.
Mother is called as Soma Kamalambal / Kamalambigai. She is housed in a separate south facing shrine in Maha Mandapam. Her shrine is situated in the northern side. She is in standing posture with four hands. She is holding Rudraksha and Lotus flower in two hands and other two hands showing varada and Abhaya Hasta.
Linga installed by Sage Vyasa can be found in the prakaram. There is a shrine for Lord Vishnu with his consorts Sridevi & Bhudevi in the Temple premises. Hanuman can be found facing Lord Vishnu Shrine. There is a Durga Shrine in the north west corner of the Temple.
The shrine houses a big Durga Idol.There are shrines for Vinayaga, Lord Murugan with his consorts Valli & Deivanai, Chandikeswarar, Durga, Bhairava and Navagrahas in the Temple premises. Sthala Vriksham is Vilwa tree. It is on the southern side of the prakaram.

How to Reach Banapureeswarar Temple Kumbakonam?