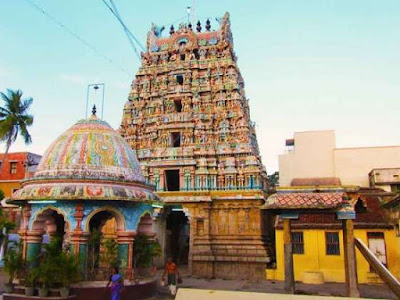 Chakrapani Temple is a Hindu Temple dedicated to Lord Vishnu located in Kumbakonam Town in Thanjavur District in Tamil Nadu. Presiding Deity is called as Chakrapani / Chakra Rajan and Mother is called as Sudarashanavalli Thaayar & Vijayavalli Thaayar Thayan This is the only Vishnu temple exclusively for Chakrathazhwar. The temple is one of S Vaishnava Temples connected with the Mahamaham festival, which takes place in Kumbakonam every 12 years.The Temple is situated between two rivers. Cauvery and Arasalaru, in the heart of Kumbakonam.This temple is situated in the north of Big Street.

As per legend. Once, the rishis found it difficult to undertake their penance at this place as they were continuously harassed by Jalandasura.At the same time, the heat of the sun in this region was becoming intolerable. At the same time, the Sun God’s heat in this region was becoming intolerable.The Sun God had become arrogant. thinking that he was the only source of light, and said that it was his choice to decide the intensity of his heat. The rishis undertook penance at this place invoking the blessings of Lord Vishnu to save them, both from the Asura and the heat.
Answering their prayers, Lord Vishnu appeared here and hurled his Chakra (also called Sudarshana), the discus, is the most powerful weapon of Lord Vishnu, to neither world to kill king Jalandasura. After killing the Jalandasura. Sudarshana Chakra emerged unscathed from River Cauvery at Kumbakonam and came into the hands of Lord Brahma who was bathing in the holy river. Lord Brahma got impressed and installed the image of Sudarshana in the place where the temple is now located.
The place where Sudarshana Chakra emerged out of water is called Chakra Theertham or Chakra Padithurai. Since the Lord has come out of Chakra, he is called Chakrapani or Chakra Rajan. The Chakra is having 365 spokes. representing the number of days. Sudarshana Chakra had the power equivalent to several times the strength of the Sun’s rays. It was brighter than Sun. Sun God was jealous to see another power brighter than him and further increased his light. But the Sudarshana Chakra absorbed all his brightness and made Sun dark.
He surrendered to the Sudarshana Chakra and prayed him for forgiveness. Lord Chakrapani appeared from the Sudarshana Chakra all bright on the Vaikasi (May-Jun) Poornima day with three eyes and hair as bright as Agni the fire and granted darshan to Sun. Pleased with the prayers, Lord restored the original brightness to the Sun.
Lord Surya wanted the town to be named after him and pleased by his devotion, Chakrapani named the city as Bhaskara Kshetra. It is believed that Surya worshiped Chakrattazhvar during Masi Magam and every year Masi Magam festival is celebrated during the day, commemorating the event.The temple car is drawn around the streets of the temple during the day.
To prevent the possibility of this place becoming over heated again, Sudarashanavalli Thaayar is seen alongside Chakrathazhwar (while normally one sees Vijaya Valli Thaayar next to Chakrathazhwar).There is a separate Shrine for Vijaya Valli ThaayanThough Chakrathazhwar is given prominence in Thirumogur near Madurai, Srirangam and other temples. this is perhaps the only temple. where he is present as the Main deity.

Once, a Brahmin named Surya Bandu was taking the Asthi Kalasa of his father along with his disciple to Kasi to immerse the ash in River Ganga. On the way, he came to Kumbakonam, he placed the Kalasa on the banks of the Holy Chakra Padithurai to perform his Sandyavadana in Cauvery River. The disciple was hungry.and he opened the kalasa to know if it contained some eatables.Then to his wonder he saw the red lotus flowers and so closed it.They reached Kasi.The Brahmin opened the kalasa and saw the bones & ashes.
The disciple informed him what he had seen in Kumbakonam. So, he returned to Kumbakonam. He opened the pot and mixed the ashes in the water of the holy Chakra Theertha. It is told that his father had informed him to mix the ashes in such a tank where they turned to be lotus flowers.A dip in this holy tank is a blessing on the day of the Thula month of Tamil year.The Sthala Purana has spoken very high of this Thula masa dip and giving Dana to the deserving.

Majority of the temple structures were built by the Nayak Kings between the 15th and 17th centuries. but the central shrine dates to the end of the Chola period. In 1620. when Govinda Dikshitar, divan (administrator) for the Nayaks, constructed the Ramaswamy Temple, Kumbakonam, he added a commercial corridor between the new temple and the older Chakrapani temple. The Mahasamprokshanam of the temple was held on 8 November 2015.
The temple has granite walls enclosing all the shrines and pierced by a five-tiered Rajagopuram, the gateway towerThe temple is noted for its exquisite pillars.This is the only Vishnu temple exclusively for Chakrathazhwar. The presiding deity, Chakrapani is sported with eight arms, each having a weapon and is housed in the central shrine in an elevated structure.
Chakrapani is sported with a third eye on his forehead. Hence, he is also called Trinethradhari. The third eye concept is the characteristic of Lord Shiva. It is also strange that the Vilva Archana which is associated with Lord Shiva is performed for Lord Vishnu here. Ahirbadri Rishi, Brahma. Surya and Agni are portrayed as worshiping the Lord in the sanctum.
Lord Lakshmi Narasimha can be found in the Koshta of the main shrine. Sudarashanavalli Thaayar is seen alongside Chakrathazhwar. Usually Chakrathazhvaar’s consort is Vijayavalli Thaayar. However, there is a separate shrine for Vijayavalli Thaayar. Stucco Dvarapalas can be found at the entrance of the sanctum.
There are two entrances for entering the central shrine of the temple. Devotees enter the southern entrance during the Dakshinayana period. when the sun is in the Southern Hemisphere and the northern entrance during the period of Uttharayana, when the sun is in the northern hemisphere.
Mother Vijayavalli Thayar has her own shrine to the north of Lord Chakrapani. There is a bronze image of king Serfoji II worshipping Lord Chakrapani as he is said to have been cured an illness by the grace of this God.There is a shrine for Panchamukha (five-faced) Hanuman in the outer precincts of the temple.
There is a shrine for Agampara Vinayakar in the temple premises. The outer Prakara of this temple is made in the form of balcony.There is a temple tank named Amirtha Pushkarini in the north side of this temple. Chakra Padithurai is a famous ghat in Kumbakonam is situated parallel to the temple across the river Cauvery.

The Sun God is supposed to be the head of all the planets (Nava Grahas). He surrendered completely to the main deity of this temple. So, if any one worships Sri Chakrapani Swami, all the Doshas due to nine planets (Nava Grahas) will vanish.Those who are affected by seven and a half year Saturn.Ashtama Sani, Ragu Dosha, Ragu Buddhi, Kethu Dosha etc., will be relieved of the Dosha on coming to this kshetra and praying to this Lord.Those who do pradhakshina of this temple will get all they desire.
The unmarried will get married soon and beget good children. Devotees who had visited all the 16 Maha Magam temples, bathed in the Potramarai Tank (Golden Lotus tank) and in the holy Cauvery cannot claim they had been relieved of all adverse aspects of planets and other powers and therefore superior to others, because all these benefits go to Lord Chakrapani to whom these benefits should be surrendered.
Chakrapani Temple attracts devotees who are mentally or physically weakened by illness or problems. Devotees believe that by going around the main shrines of the main deity, Chakrapani and his consort Sudarashanavalli their wishes will be fulfilled. The special fire ritual called Sudarshana Homam, Thirumanjanam and Sahasranama Archanai when the 1008 names of Lord Vishnu are chanted with offerings of flowers, are special in this temple.
As Lord blesses devotees with three eyes, three items are used in the archanas — flowers, Kumkum and Tulsi leaves. The flowers and leaves Viz.Thulasi, Kumkum,Vilvam,Vanni, Chemparuthi,Arali are offered to this Lord as Surya,Agni, Brahma and the sages Markandeya and Ahirbudhnya Maharishi did archana with the above said flowers and leaves.The special Prasadam (offering) in this Temple to the main deity is a sweet pudding made with wheat called Gothumai Payasam.

How to Reach Chakrapani Temple?