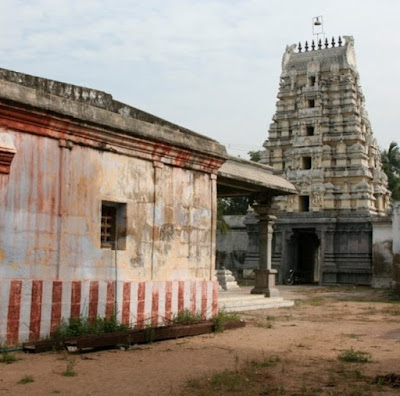 Gajendra Varadha Perumal Temple in Thirukkavithalam, a village in the outskirts of Papanasam in the South Indian state of Tamilnadu, is dedicated to the Hindu god Maha Vishnu. Constructed in the Dravidian style of architecture, the temple is glorified in the Naalaayira Divya Prabandha, the early medieval Tamil canon of the Azhwar saints from the 6th–9th centuries AD. It is one of the 108 Divyadesam dedicated to Vishnu, who is worshipped as Gajendra Varadha and his consort Lakshmi as Ramamanivalli. The temple is one of the five Pancha-Kannan temples, where Krishna, an avatar of Vishnu is given prominence over the presiding deity.
The temple is believed to have been built by the Medieval Cholas of the late 8th century AD, with later contributions from Vijayanagar kings and Madurai Nayaks. A granite wall surrounds the temple, enclosing all its shrines and its bodies of water.
Gajendra Varadha is believed to have appeared to Gajendra the elephant also called Indrajumnan, the crocodile called Koohoo, Sage Parasara and Sri Anjaneya. Six daily rituals and four yearly festivals are held at the temple, of which the Gajendra Moksha Leela, celebrated during the Tamil month of Aadi (July–August), is the most prominent. The temple is maintained and administered by the Hindu Religious and Endowment Board of the Government of Tamil Nadu.

As per Hindu legend, King Indrajuman, who immersed himself in the worship of Lord Vishnu, failed to strengthen his army and lost his kingdom. While doing worship, he also did not observe the sage Durvasa (some sources claim it as Agasthya) who went along his way. The sage got irritated and cursed the king to be born as an elephant in his next birth. The king apologized to the sage for his negligence and moved by his innocence, the sage wished that he would continue to be a Vishnu devotee as an elephant and that Vishnu would bestow him goodwill.
There was a demon by name Koohoo in the temple tank at this place, who troubled all who took bath in the tank. He was cursed by a sage to be born as crocodile in his next birth. The elephant Gajendra continued as a Vishnu devotee and while drinking water from the temple tank, his leg was grabbed the crocodile Koohoo. The elephant cried in rescue calling the name “Adimulam” and Vishnu sent his discus to fend off the crocodile. Both the elephant and crocodile turned to their human form by the grace of Vishnu. Since Vishnu appeared here to save the elephant Gajendra, he came to be known as Gajendra Varadar. Hanuman, the monkey lieutenant of Rama, (avatar of Vishnu) also worshiped Vishnu at this place and hence the place came to be known as Kabisthalam (kabi in Tamil indicated monkey).

Saint Tirumazhisai Azhwar had praised Perumal of this temple as “Attrangarai kidakkum Kannan – Kannan reclining on the river bed”. Since then he is endearingly called Kannan by the devotees and the name had come to stay. Among the celebrated five Perumal temples as Pancha (five) Krishna Kshetrams, Kabisthalam is one. Other four are Tirukannamangai, Thirukannapuram, Tirukovilur and Thirukannangudi. It is also noteworthy that of the 108 Divya Desas, only in this temple, Perumal had granted darshan two non-humans, an elephant and a crocodile.

The temple is located in Kabisthalam, a village situated 3 km (1.9 mi) away from Papanasam and around 20 km (12 mi) away from Kumbakonam and Thanjavur, towns in the South Indian state of Tamilnadu. The village is located in between the two rivers Kaveri and Kollidam. The temple is believed to have been built by the Medieval Cholas of the late 8th century AD, with later contributions from Vijayanagar kings and Madurai Nayaks. A brick wall surrounds the temple, enclosing all its shrines and bodies of water.
The temple has a five-tier Rajagopuram and a single precinct. The prime deity, Gajendra Varadhar is enshrined in the sanctum, in a reclining posture, called Bhujanga Sayanam. The vimana (roof above the sanctum) is called Ganganakrutha Vimanam. There is a separate shrine for Ramanavalli, located to the right of the sanctum.
There are separate shrines for Yoga Narasimhar, Sudarsana, Garuda and the Azhwars in the first sanctum. The main temple tank is Gajendra Pushkarani and there is another tank called Kapila Theertham, located inside the temple complex.
The other deities of this temple are Goddess Lakshmi, the consort of Lord Vishnu worshipped as Goddess Ramanavalli, Lord Yoga Narasimhar, Lord Sudarsana, Garuda (the vehicle of Lord Vishnu) and the Azhwars.

The temple priests perform the pooja (rituals) during festivals and on a daily basis. As at other Vishnu temples of Tamil Nadu, the priests belong to the Vaishnavaite community, a Brahmin sub-caste. The temple rituals are performed six times a day: Ushathkalam at 7 a.m., Kalasanthi at 8:00 a.m., Uchikalam at 12:00 p.m., Sayarakshai at 6:00 p.m., Irandamkalam at 7:00 p.m. and Ardha Jamam at 8:00 p.m. Each ritual has three steps: Alangaram (decoration), neivethanam (food offering) and deepa aradanai (waving of lamps) for both Gajendra Varadhan and Ramanavalli.
During the last step of worship, nagaswaram (pipe instrument) and tavil (percussion instrument) are played, religious instructions in the Vedas (sacred text) are recited by priests, and worshippers prostrate themselves in front of the temple mast. There are weekly, monthly and fortnightly rituals performed in the temple. The Gajendra Moksha Leela celebrated in the Tamil month of Adi (July–August), Chariot festival during the Tamil month of Vaikasi (May–June) on Visakam star and Brahmotsavam are the major festivals celebrated in the temple, along with all Vishnu related festivals.

The temple is revered in Nalayira Divya Prabandham, the 7th–9th century Vaishnava canon, by Tirumazhisai Alwar in one hymn. The temple is classified as a Divyadesam, one of the 108 Vishnu temples that are mentioned in the book. Since there is only a passing mention about the place in the verse, it was earlier not clear on whether the verse refers to the temple. But it has been concluded that the verse “Attrangarai Kidakkum Kannan” meaning the Lord on the banks of the river refers to Gajendra Varadar in this place.

This temple is one of the Panchakanna (Krishnaranya) Kshetrams. Kannan refers to Krishna, the avatar of Vishnu, while Pancha means five and Kshetrams refers to holy places. Four of the five temples are situated in Chola Nadu, in modern times, in the region surrounding Kumbakonam and Nagapattinam and one of them in Nadu Naadu. There are five similar temples located in North India, called Pancha-dvarakas. Krishna is not the presiding deity in any of the temples. The processional deity, Krishna, led to the derivation of the names of these places. In Kabisthalam, Kannan is referred as “reclining Lord in the river banks”.

The devotees have only to call the loudly “Aadhimoolame”. All their grievances will be redressed and wishes granted. Devotees perform Thirumanjanam to Perumal and offer vastras.

Kabisthalam is 10 km from Kumbakonam on the Tiruvaiyaru route. Nearest Railway Station is located at Papanasam & Nearest Airport is located at Trichy.