History of Pongal Festival – Why is Pongal Celebrated?

The festival is of immense value to the people of Tamil Nadu. They thank the Sun God for providing the energy to grow crops, on which the livelihood of farmers depends. It is celebrated by boiling the first rice of the harvest, which is first offered to gods and then distributed among family members. 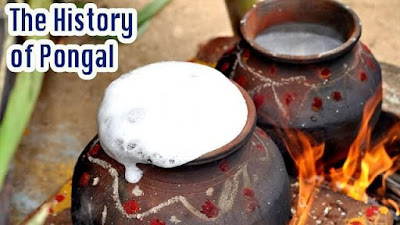 What is Pongal Festival?

The term ‘Pongal’ is derived from the Tamil literature which means ‘to boil’. It is an ancient festival of South India, particularly Tamils. It is basically a harvest festival which is celebrated for four-day-long in Tamil Nadu in the month of January-February (Thai) during the solar equinox after harvesting of crops like rice, sugarcane, turmeric, etc.
Pongal festival is a four-day celebration affair. Each day marked by different festivities- First day is called the Bhogi festival; Second day is called Thai Pongal; the Third day is called Mattu Pongal; the Fourth day is called Kaanum Pongal.
On Pongal, families prepare Pongal and Shakkara Pongal dishes. Apart from this, sugarcane is also offered. A special Puja is held to offer prayers to the Sun God. On the first of the four-day festival, called Bhogi, people discard old articles and welcome new ones. Farmers burn old items in a fire while chanting a mantra that translates to “Let old things go away and let new things come our way”. The message behind this day is to not be resistant to change. One should change with changing times and embrace new ideas and thoughts.

History of the Pongal Festival

The history of the festival can be traced back to the Sangam Age and considered as the ‘Dravidian Harvest festival’. But some of the historians claim that this festival is dated back at least 2,000 years old. It was celebrated as Thai Niradal.
The celebration of the festival of Pongal dates back to 2,000 years, as early as the early Chola empire. Celebrated on the third day of the Thai month, it is important to most Hindu families in Tamil Nadu as they pray to Sun God Surya and Lord Indra. The festival gets its name from the dish that is prepared to mark the occasion.

Importance of the Pongal

It is basically a harvesting festival or it can be considered as the ‘thanksgiving’ festival’ because this festival is celebrated to thank the Sun God and Lord Indra for helping farmers in getting better-yielding crops. During the festival, people reject old belongings and welcome new stuff.

Significance of the Pongal

As we know that India is an agricultural country and the majority of the festivals are inclined towards nature. Just like another festival, the Pongal is referred to as Uttarayan Punyakalam which bears special significance in Hindu mythology and is considered extremely auspicious.
Read, also: History of Pongal Festival in Tamil