🛕 Arulmigu Mariamman Temple is located at Irukkangudi about 8 km East of Sathur on Thiruchendur Highway via Vilathikulam from Trichy, Madurai and Virudhunagar. This temple is 500 years old.

About The Irukkankudi Mariamman Temple

🛕 The sanctum sanctorum is under a beautiful vimana. The Artha Mandap and Maha Mandap are close to the sanctum. Sri Nandeeswara and flag post-Kodimaram are in a line. Lord Vinayaka is under the Arasa Maram. On the west are Vazha Vandha Amman and Rakachi Amman. Pechi Amman and Muppidari Amman are in separate shrines on the northwest. Kathavarayan and Vairavamurthi are in the east. Karuppusami is in southeast corner. Devotees worship all these deities and Mariamman in order.

🛕 Traditionally, Mother Mariamman appears in a sitting posture with left leg folded and the right hanging. It is vice-versa here.

🛕 This temple is located between the two rivers Vaipparu and Arjuna. As two Ganges meet here it got its name Irukkangudi. River Arjuna flowing in the Northern part of this temple originates at Mahalinga hills known as Vathira Iruppu hills in the west. According to “Thiruthankal Temple Lore” once upon a time when Pancha Pandavas came here, Arjuna prayed to Goddess Ganga and split the earth with ‘Varunakanai'(arrow) forming a river. The river formed as a result came to be known as Arjuna river.

🛕 River Vaipparu flows in the Southern part of this temple. According to Uthira Kandam of Epic Ramayana. A hunter named Sambukan indulged in deep penance amidst fire in the Northern part of Sivasailam at the foot of Podhigai hills. As a result a Brahman died at Ayodhi. Sri Raman, king of Ayodya killed Sambukan and brought back the Brahman to life.

🛕 Lord Rama had commited sin by killing a person doing penance. He got relieved from the curse by worshipping Lord Siva in Siva malai hills. After this Lord.

🛕 Rama along with his retinue reached western Ghats region situated between Vasudeva Nallur and Puliangudi. After searching vainly for water, Lord Rama was told about the pot containig sacred rivers buried by Sage Agasthiyar. Lord Rama broke the pot with his arrow and formed a river. As it was formed form Vaippu(Treasure) it came to be known as Vaipparu. It flows through Karivalam Vantha Nallur, Sathur and Kollappati and reaches Irrukkangudi where it mixes with Arjuna river and drains into sea via Muthalapuram and Viathikulam. River Vaipparu formed by Rama and river Arjuna formed by Arjuna are the Holy water points of this temple.

🛕 This happened 300 years ago between Arjuna and Vaiparu rivers. A priest – Poosari – woman filled her basket with the cow dung she gathered and was prepared to go home with the basket but could not lift it alone. She asked others to help her. They too could not lift the basket. She herself was influenced by the power of Goddess and exclaimed that Amman was under the ground where the basket was placed and ordered them to take Her out and build a temple.

🛕 The villagers found the idol of Mother Amman, built the temple and are doing the pujas. Since then, She is the deity for the villagers taking care of their welfare.

🛕 The last Friday of Aadi is celebrated grandly. Flag hoisting ceremony is performed on the Friday of the previous week. During the last Friday, Urchavar figure of Goddess Mariamman is mounted on Idabavahana at Urchavar Temple and visit Arjuna river. From here Goddess is taken to Moolavar temple. The next day she returns to Urchavar temple.

🛕 During the last Friday of Thai and Panguni devotees congregate at rivers Arjuna and Vaipparu to get the blessings of Goddess Mariamman. Devotees whose wishes are fulfilled show their devotion to Goddess by taking part in ‘Agnichatti’, ‘Aiyarankan Panai’, ‘Kayiru Kuthuthal’. Etc.,

🛕 Those suffering from impaired vision, stomach pain and other troubles, small pox, pain in hands and legs pray to Mari Amman for relief.

How to Reach Irukkankudi Mariamman Temple?

Airport: Nearest Airport is at Madurai, from here there is bus service via Virudhunagar to reach this temple.

Railways: The nearest railway station is at Sattur.

Road: Irukkankudi is 8 km east of Sattur on the Tiruchendur road. Town bus facility is conveniently available from Sattur to reach the temple. 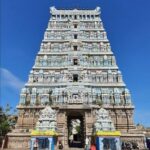