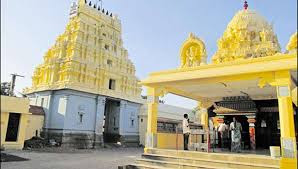 As per legend, Once, Sage Durvasa was wandering the earth in a state of ecstasy due to a vow he was observing. Sage Durvasa saw a Vidyadhari (a nymph of the air) wearing the heavenly wreath of flowers and demanded her the garland she was wearing. The nymph respectfully gave the garland to the sage, whereupon he wore it on his brow. Resuming his wanderings, the sage came across Indra riding his elephant, Airavata, attended by the gods. Durvasa, still in his state of frenzy, threw the garland at Indra, who caught it and placed it on Airavata’s head.
The elephant was irritated by the fragrance of the nectar in the flowers, so it threw the garland to the ground with its trunk. Durvasa was enraged to see his gift treated so callously and cursed Indra that he would be cast down from his position of dominion over the three worlds, just as the garland was cast down. Indra immediately begged Duruvasa’s forgiveness, but the sage refused to retract or even soften his curse and went on his way. Because of the curse, Indra and the devas were diminished in strength and shorn of their lustre.
Seizing this opportunity, the asuras led by Bali waged war against the gods. The gods were routed and turned to Lord Brahma for help. Lord Brahma directed them to seek advice from Lord Vishnu. Lord Vishnu in turn, advised them to call a truce with the asuras and work together with them to churn the ocean of milk and obtain the Amrita (nectar of immortality), on the pretext of sharing it with them. Vishnu promised that he would ensure only the devas drank the Nectar and reobtain their former power, so they could once again defeat the asuras.
The devas took Vishnu’s advice and called their truce with the asuras and thus did the gods and demons begin planning their great enterprise. During the churning of the Ocean of Milk (Samudra Manthana), Mount Mandara was used as the churning rod, and Vasuki, a Nagaraja who abides on Lord Shiva’s neck, became the churning rope. During the churning process, the Halahala poison escaped from the mouth of the serpent king Vasuki. This terrified the gods and demons because the poison was so powerful that it could destroy all of creation.
Despite this, the Devas and the Asuras pulled back and forth on the snake’s body alternately, causing the mountain to rotate, which in turn churned the ocean. The Devas then approached Lord Shiva for protection. Lord Shiva consumed the poison. Lord Shiva was suffering intense pain. Mother Parvati immediately places a hand on his throat, stopping the poison to flow any further, and by her Maya stopped it forever. As a result, his throat turned blue and he was henceforth called Neelakantha (the blue-throated one; Neela – blue, Kantha – throat in Sanskrit). After consuming the Halahala poison, Lord Shiva came to this Sthalam and sat in silence. Devas and all celestial beings worshipped Lord Shiva here during his stay.

Villupuram was called as Vijaya Nriputunga Jayanthangi Chathuvedhi Mangalam during Pallava era. This name clearly states that Villupuram was named after the Pallava King Nriputunga Varman (869 A.D. – 880 A.D.). Villupuram was called as Jananatha Chathuvedhi Mangalam during the reign of Rajaraja Chola I. During the later Cholas period, Villupuram was called as Vizhuparayapuram named after its local chieftain Vizhupparaiyan. Villupuram was called as Vizhuppuram (Janakapuri) in 1265 A.D during the reign of Jadavarman Sundara Pandyan as evidenced by the inscription in Villupuram Vaikundavasa Perumal Temple.
Kailasanathar Temple was in existence even before the rule of Chola Emperor Rajaraja Chola I. The temple received extensive patronage from Kulothunga Chola I, Kadava Emperor Kopperunjinga, Rajanarayana Sambuvarayar, Jadavarman Sundara Pandya, Viruppanna Udaiyar, Saluva Narasingaraya Udaiyar, Narasinga Nayakar, Krishnadevaraya, Achuthadeva Maharayar, Sadasiva Devaraya, and Sriranga Devar II. The Temple faced destruction during heavy floods in 15th Century AD and the subsequently renovated by the Vijayanagara Kings.
This Temple is facing towards east with five tiered Rajagopuram. However, the Rajagopuram is facing towards west. There is another entrance on the eastern side leading to Nandavanam. Few broken idols and ancient ruins can be seen in Nandavanam. There is a four pillared Mandapam immediately after the eastern entrance. Balipeedam, Dhwaja Sthambam and Nandi housed in Mandapam can be seen facing the sanctum immediately after the four pillared Mandapam.

Ganesha, Guru Dakshinamoorthy, Lingodbhava, Brahma and Durga are the Koshta Idols located around the sanctum walls.

Chandikeswarar Shrine can be seen in his usual location. His Shrine is facing towards south.

There is a north facing shrine for Arumugar on the left side of Mukha Mandapam. His Shrine consists of Ardha Mandapam and Sanctum. He is housed in the sanctum along with his consorts Valli & Deivanai. It is unique to see Lord Arumugar facing the Palli Arai. This feature is nowhere to be seen. Carvings of peacock and other animals can be seen on the outer wall of the shrine.

Saneeswarar Idol can be found in the Mukha Mandapam at the south side entrance of Maha Mandapam. This Idol is facing towards east and situated close to the entrance.

There is a west facing shrine for Bhairavar in the Mukha Mandapam at the south side entrance of Maha Mandapam.

Vinayagar Shrine can be found in the Mukha Mandapam at the south side entrance of Maha Mandapam. This shrine is facing towards east. Moonjuru, his vehicle and Balipeedam can be seen facing the sanctum.

Somaskanda Shrine can be found in the Mukha Mandapam at the south side entrance of Maha Mandapam. This shrine is facing towards east and situated next to Vinayagar Shrine.

Mother is called as Brihan Nayagi / Periyanayaki / Brahandha Nayagi. She is housed in a separate west facing shrine. She is in standing posture. She is four armed holding lotus flowers in upper hands and lower hands showing Varada and Abhaya Mudra. Her shrine is situated to the left side of the sanctum. Her Shrine consists of Sanctum, Ardha Mandapam, Maha Mandapam and Mukha Mandapam. Dwarapalakis can be seen guarding the Maha Mandapam. Nandi and Balipeedam, housed in a small Mandapam, can be seen facing her shrine. Idols of two elephants can be seen on either side of the entrance of her shrine.

Navagraha Shrine is located in between Mother shrine and Sanctum.

There is an east facing shrine of Bala Vinayagar on the extreme right side immediately after the Rajagopuram.

There is an east facing shrine of Bala Murugan on the extreme left side immediately after the Rajagopuram.

There is a west facing shrine for Anjaneyar on the extreme left side of Nandi immediately after the eastern entrance.

Yaga Salai is situated on the extreme right side of Nandi immediately after the eastern entrance.

How to Reach Kailasanathar Temple Villupuram?