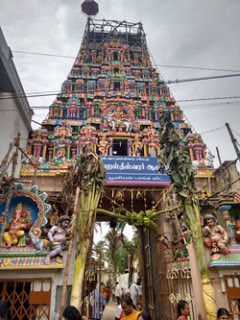 The temple was renovated by Sarfoji Maharaja of Thanjavur in 18th Century CE under the guidance of then Kanchi Peedathipathi.The last consecration of the temple was held on 26th October 2015.
This Temple is facing towards east with five tiered Rajagopuram. Lord Vinayaka and Lord Muruga grace at the Rajagopuram entrance. There is an entrance to this Temple via Kamakshi Josiyar Street. Presiding Deity is called as Kalahasteeswarar and is facing east. He is housed in the sanctum in the form of Lingam. Dakshinamoorthy, Lingothbhava and Durga are the Koshta Idols located around the sanctum walls.
Mother is called as Gnanambigai / Gnanaprahalambigai. She is housed in a separate south facing shrine. Mother shrine is situated to the right side of sanctum.There is a west facing shrine for Lord Shiva Surya in the temple premises.There is a separate shrine for Nataraja in the temple premises. Lord Nataraja is holding the court along with Mother Shivagami. Manickavasagar can be found in this shrine.
There is a shrine for Jwarahareswarar / Juradeva in the temple premises. He appears with three legs of which two are on the ground and one is in folding position. As illnesses occur due to three problems in bones, veins and skin, it is said that Lord Juradeva has three legs to protect the sick devotees.Abhishek to Lord is performed with hot water.
There is a shrine for Kalyana Sundareswarar with Katyayini in the temple premises. Lord Kalyana Sundara Murthy and Mother Kathyayini appears in marriage attire with a walking stick. It represents the tradition of bridegroom going to Kasi symbolically during the wedding ceremony. There is a shrine for Durga in the temple premises. She is called as Ashtadasa Bhuja Mahalakshmi Durga as she is having 18 hands. Mother Durga is the authority on Rahu planet.
There are shrines for Siddhi Vinayaga, Meenakshi Sundareswarar, Kasi Viswanathar, Saraswathi, Lakshmi, Ganga, Navagrahas, Anjaneya and Rahu in the temple premises. When the bell of this temple rings, it sounds OHM. SthalaVriksham is Vilwa Tree.

The wedding celebration of Lord Kalahastheeswarar is celebrated in this temple on the Makara Sankranti day (Thai Pongal in Tamil) taking place almost on the 14th January each year. During Mahamaham, Lord is taken in procession for Theerthavari. Pujas to Mother Durga is performed during Rahukalam time.
Prayers Prayers offered here to the Lord Shiva and Gnanaprahalambigai are equal to the Vayu Lingam of Kalahasti itself. Abishekams to Jwarakeswara are performed with hot water and offerings are usually boiled rice with pepper and vilva leaves to appease the Lord who can alleviate Jwara (fever). Devotees pray here for relief from critical and prolonged diseases.

How to Reach Kalahasteeswarar Temple Kumbakonam?