Goddess Kaali is also known as Kalikambal. In other words she is the incarnation of Maa Kaali. Kaalikambal is the Sowmya Swarupa (amsa) of Adi Shakti.

Where is the Kalikambal Temple Situated?

The sacred Goddess Sri Kalikambal Temple is situated in the heart of Chennai City in Tamil Nadu and located near George Town around Parry’s Corner, Thambu Chetty Street which is a commercial hub dedicated to Sri Kaalikambal and Lord Sri Kamadeswara.

How old is the Chennai Kalikambal Temple?

It is an ancient temple dates back to almost 3000 years. The details about the God Sri Kamadeswara and Goddess Kaalikambal are mentioned in various puranas.

Which are the Purana details about this Kalikambal Temple mentioned?

Among 18 ancient puranas the details of the Goddess of this temple is specifically mentioned in Matsya, Vamana, Kurma, Linga and Bhavishya puranam.

Previously and Presently where is the Kalikambal Temple Located

As per the history, earlier this temple was located much closer to the seashore. It was during the year 1639 as requested by the British Merchants the local Vishwakarma Community people constructed the temple under the guidance of Brahmasri Muthumari Achari in its present location on Parry’s Corner (Old George Town) on the street parallel to a prominent commercial street called Thambu Chetty Street.

What are the other names of Goddess Kalikambal?

During olden days this temple was kept in a small thatched shed near the seashore nearby to a fishermen hamlet. The local fisher women used to worship the goddess by applying Sindhoor to the Goddess and called her as “CHENNI AMMAN”.

As the temple was relocated inside the Fort, the goddess known as KOTTAI AMMAN.

The Goddess Kalikambal is also fondly called as “NEITHAL (Sea and adjoining land) KAMAKSHI” Goddess Kamakshi is the mother for all living being, and is considered as highly benevolent. She bestows the boon upon her devotees, who worship her with faith.

During those days when the deity was kept on the seashore it was told she was harsh, fierce and vigorous form of nature. Only in the year 1640 AD the deity has been shifted to the present Thambu Chetty Street location and her nature has become soft and shantha swarupam. 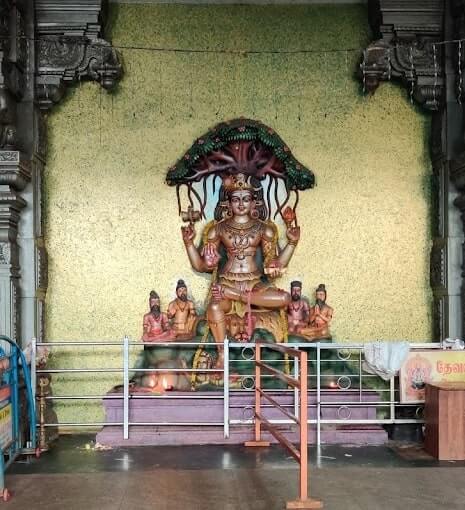 Which direction the Kalikambal Temple is Facing?

Though the temple entrance is facing East direction the sitting posture of the Goddess is facing West direction.

What are the names of Kalikambal Temple Towers?

Who is known as Common God among all Six Sects of Hinduism?

Why is Kalikamba also called as Kamakshi?

Sage Sri Adi Shankara consecrated Sri Chakra in this temple. Hence the Goddess is also called as Kamakshi and this temple is treated as very important and powerful.

Which are the Devathas visited Goddess Kalikambal?

Various Devathas like Indira, Kubera, Varuna and Virat Purusha like Vishwa Karma, Sages Vedhavyasa, Pulastya, Parachara, Angiras and Agastya had visited, had darshan and the grace of Goddess Kalikambal.

Also Naglok and Devlok Kanyas had visited this sacred temple and had the grace of the Goddess.

Other names of the place where Goddess Kalikambal Temple located

The name of this place is also called as SWARNAPURI & BHARATHAPURI.

It is said that goddess Kalikambal is also in the form of Goddess Mahalakshmi and Goddess Saraswati as she keep them as her two hands.

The Ambal holds Pasha in one hand Ankusha in her two upper hands, the Nilotpala blossom in the lower right, with No lower left hand in varada hasta. A unique feature is that the deity in the Garbhagriha faces west. This intensifies Ambal’s power as Kshipra Prasadini (swift granter of boons for her devotees).

It is believed that If anyone worship Goddess Kaalikambal in this temple they will get the benefits of worshipping Goddess Sri Kamakshi of Kanchipuram and Lord Sri Arunachaleswara of Thiruvannamalai here itself without visiting those respective sacred places and it will bring them miracles.

Also the power of Goddess Kalikambal is, if you pray her and light a lamp in the puja room of your house where you live; it will bring all good things what you wish with her.

After performing turmeric abhishekam to goddess, by drinking small portions of turmeric prasad mixing with little water by a devotee everyday will grant children for those who expects children.

The great Maratha warrior King Shivaji Maharaj visited and worshipped Goddess on 03rd Oct. 1677. Only after visiting this temple he got the honour title and become Chhatrapati Shivaji. 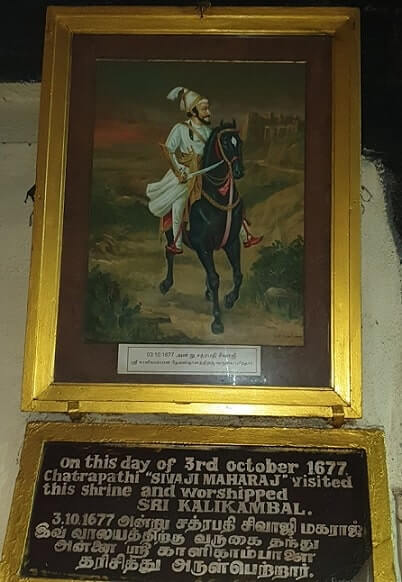 The great poet and freedom fighter of our country who belongs to Tamil Nadu Sri Subramanya Bharathi alias Bharathiyar used to visit this temple every often when he was working with Sudesa Mithran Newspaper. During that time he wrote a song mentioning “Yaadhumaagi Nindraai Kaali, Engum Nee Niraindhai” means “You stood as Everything, You were full everywhere, Oh KAALI”.

During the Tamil month of Karthigai thousands of devotees throng this temple as Karthigai Amavasya is the very suspicious day on account of janma dhinam of Goddess Kaalikambal and special pooja and abhishekam will be performed on this day and Pournami day of every Tamil month. 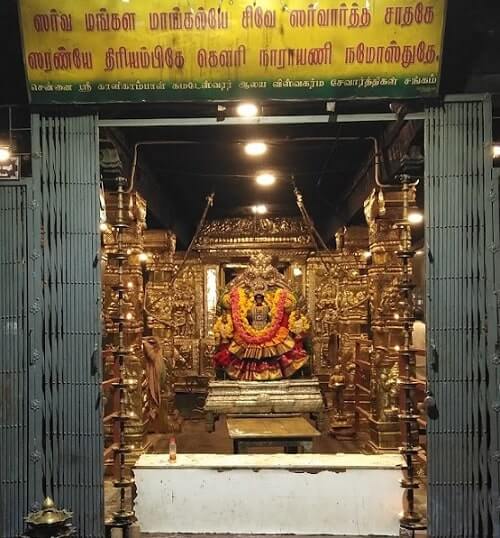 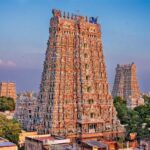