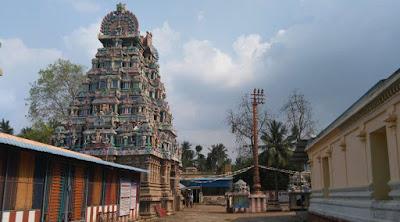 Kalyanasundaresar Temple or Thirunallur is a Hindu temple dedicated to the deity Shiva, located in Nallur, in the outskirts of Kumbakonam in Tamilnadu, India. Shiva is worshiped as Kalyanasundaresar, and is represented by the lingam. His consort Parvati is depicted as Girisundari. The presiding deity is revered in the 7th century Tamil Saiva canonical work, the Tevaram, written by Tamil saint poets known as the nayanars and classified as Paadal Petra Sthalam.
The legend of the temple is associated with sage Agastya and Amaraneethi Nayanar, one of the 63 nayanars, the Tamil Saiva saints. The lingam in the temple is believed to change colours five times during the day time.
This Shivastalam is a Maadakovil built at an elevation and this hillock is referred to as Sundaragiri. It is located at a distance of 6 km from Kumbhakonam. Located 3kms south East of Papanasam and 1km from Sundara Perumal Koil near Kumbakonam is the Kalyana Sundareswarar temple in Thiru Nallur, a temple that has been praised by Appar, Sambandhar, Sundarar and Manickavasagar.

As per another legend, one of the 63 Nayanmars, Amaraneethi Nayanar, spent his life supplying undergarments to all worshipers of Shiva. Shiva wanted to test his devotion and appeared to him in the form of a Brahmin. The Brahmin deposited a piece of rag in the custody of Amaraneethi, which was lost by a trick. The Brahmin demanded equal weight of gold in return of the lost rag. Amaraneethi deposited all his wealth in one side of a scale pan, but it did not balance. Finally, he submitted himself and his wife in the scale pan. Shiva was pleased by the devotion of the nayanar and bestowed him with all his wishes.

The Fight between Vayu and Adiseshan

Vayu gets angry after Adiseshan is praised as being better than him. Adiseshan says that he can cover Kailayam and threw up a challenge to Vayu to remove one stone from the Meru Mountain through his power. Vayu blew air as powerfully as he could. Everyone was in a shocked state and went to Lord.
As Adiseshan turned his head for a fraction of a second, Vayu’s capitalized on this momentum lapse and his power sent several pieces scattering from the mountain. One piece fell here in Thiru Nallur. This is a swayambu Moorthy.

The entire set of devotees of Shiva congregated in the North to witness the celestial wedding of Shiva and Uma Devi. The weight tilted the balance of the earth as the excess weight on the Northern side led to rising of the Southern side. Realizing this imbalance, Shiva directed Sage Agastya to head south to bring about a balance between South and North.
As Agastya expressed unhappiness at his missing the celestial wedding, Shiva promised to provide a similar darshan in the place down south if he helped bring about this south-north balance during the period of his wedding.
Agastya reached Thiru Nallur and with an idol of Shiva performed pooja every day. This idol is seen even today inside the sanctum south of the Swayambu Moorthy.
In a thankful gesture, Shiva provided ‘Kalyana Kolam’ darshan to Sage Agastya here at South Kailasam. Also, seen inside the sanctum are Vishnu and Brahmma in a standing posture. This is a special temple for the first Darshan of Vishnu, Brahmma and Shiva together. Ancient paintings are seen on the walls of the Sanctum.

Having thrown his first son into the river, Kunti was seeking liberation from the sin of having thrown her first son into the river. On the occasion of Maasi Magam she met Sage Narada who suggested that it was sacred to have bath on this auspicious day. Kunti invoked the blessings of Lord Shiva who brought the Saptha Sagara Theertham here at Thiru Nallur. In memory of this event, one finds the idol of Kunti in a posture of invoking the blessings of Lord Shiva. The story goes that the ‘Magam’ begun here and Maha Magam in Kumbakonam.

Staying of Thyagaraja of Thiruvarur here

After having secured the idol of Lord Thyagaraja of Thiruvarur from Lord Indra, Musukunthan was directed to place the idol here for three days before taking it to his abode at Thiruvarur. Hence Thiru Nallur is credited with the historical event of a 3day pooja being performed for Thyagaraja before finally resting at Thiruvarur.

Seeking the Lord’s feet before his death, Saivite Saint Poet Thirunavukarasar (Appar) began his trip from Thiruvathigai and had darshan at Chidambaram, Sirkazhi and Tiruvidaimaruthur. Pleased with his sincere prayers, Lord Shiva directed him to come to Thiru Nallur. On reaching here, Appar received Thiruvadi Deekshithai with Lord Shiva placing his feet on the head of the great Saint Poet. In memory of this event, Shataari, which is placed on the head of a devotee as a blessing of Lord Vishnu in Perumal temples, is placed on a devotee at this temple as well. This placing of Shataari on the devotee is a unique feature at the Thiru Nallur temple.
Delighted at this gesture of Lord Shiva, Appar praised the Lord as
“வடபால் கைலாயம் தென்பால் திரு நல்லூர்”
He stayed here for many days singing praise of the Lord before he moved on to nearby places such as Thiru Palathurai, Thiru Karugavur, Thiru Aavur and Thiru Pazhanam. And finally he moved on from here to Thiruvarur.

The Swayambu Moolavar Idol changes colour five times a day every 2 1/2hours changing from Lotus colour to red to gold to green and finally to a colour as visualized by a sincere devotee in the evening. As he provides darshan in these five different colours the Lord is also referred to as Pancha Varneswarar. Hence it is said that visiting the Lord here and invoking his blessings is equivalent to visiting the Pancha Bhootha sthalam.

The 7th century Nayanar saints Sambandar and Appar wrote of the temple in their poetic work, Tevaram. The original masonry and towers date back to the 9th century CE, as seen from an inscription in the structure made by Chola kings. The Chola kings ruled over the region for more than four centuries, from 850 CE to 1280 CE, and were temple patrons.
The temple complex dates from the time of the 10th century AD Medieval Chola king Uttama Chola whose inscriptions are found in its walls. An inscription dated to the fifteenth year of Raja Raja Chola makes a reference to “Panchavanmahadevi chaturvedimangalam”, which is another name for Nallur.
There are also inscription by Later Chola kings and by Hoysala monarchs. The inscriptions from the Chola kings record various gifts like land, sheep, cow and oil to the temple commemorating various victories of the dynasty. There are lots of inscriptions from the Sangama Dynasty (1336–1485 CE), Saluva Dynasty, and Tuluva Dynasty (1491–1570 CE) of the Vijayanagara Empire, reflecting gifts to the temple from their rulers.
The majority of the gift related inscriptions are for land endowments, followed by goods, cash endowments, cows and oil for lighting lamps. The temple has been maintained by the Tiruvaduthurai Adheenam from the early part of the 13th century.

There are several inscriptions at the temple that date back to the Chozha period. Inscriptions from the period of Rajaraja I and from the period of Uttama Chola are seen here, in addition to several from later years. One of the inscriptions dating back to the rule of Rajendra Chozha refers to this place as ‘Niththa Vinodha Vada Naattu Nallur’, ‘Panchavan Mahadevi Chaturvedi Mangalam’ with the Lord being referred to as ‘Thiru Nallur Udaya Naayanaar’ and the main Vinayaka deity being referred to as ‘Agampadi Vinayaka’.

A clutch of rare paintings dating back to the Vijayanagar era were found at the sanctum sanctorum of Sri Kalyanasundareswarar Temple at Nallur in the district recently. Though many paintings adorn the walls of the sanctum sanctorum, except four all have faded.
“The paintings are that of Naradar playing a veena, an artiste holding a pair of cymbals, moon, and child Skanda holding a lotus. They are painted using natural colours and the background is of dark hue with colourful flowers and clouds,”
The temple belonging to Tiruvavaduthurai Adheenam is one of the madakoils of Chola country and is located near the ancient city of Pazhayarai, the historical capital of the Cholas. The temple finds a specific mention in the hagiography of saint Thirunavukarasar and Amarniti Nayanar and was renovated and reconsecrated by the Chola queen, Sembian Mahadevi.

The temple priests perform the puja (rituals) during festivals and on a daily basis. Like other Shiva temples of Tamil Nadu, the priests belong to the Shaiva community, a Brahmin sub-caste. The temple rituals are performed six times a day; Ushathkalam at 5:30 a.m., Kalasanthi at 8:00 a.m., Uchikalam at 10:00 a.m., Sayarakshai at 5:00 p.m., Irandamkalam at 7:00 p.m. and Ardha Jamam at 8:00 p.m.
Each ritual comprises four steps: Abhisheka (sacred bath), Alangaram (decoration), neivethanam (food offering) and deepa aradanai (waving of lamps) for both Kalyanasundaresar and Girisundari. The worship is held amidst music with nagaswaram (pipe instrument) and tavil (percussion instrument), religious instructions in the Vedas (sacred texts) read by priests and prostration by worshippers in front of the temple mast.
There are weekly rituals like Somavaram (Monday) and sukravaram (Friday), fortnightly rituals like Pradosham and monthly festivals like Amavasai (new moon day), Kiruthigai, Pournami (full moon day) and sathurthi. Shivrathri in February–March and Margazhi Tiruvadhirai in December–January are the major yearly festivals celebrated in the temple.
During Masi Magam festival, the Somaskanda Murthy is taken in procession around the temple. Pregnant women conduct bangle ceremony in the temple, praying to the central deity of the temple and Kali for smooth delivery. Tonsure ceremony for getting children shaved for the first time to promote proper growth is a very common worship practice. Shiva is believed to have shown his feet to saint Thirunavukarasar and hence the practice of blessing with Sadari, which is otherwise practiced in Vishnu temples, is followed in the temple.

Maha Shivrathri in February-March and Margazhi Tiruvadhirai in December-January are the festivals of the temple. 10day Brahmotsavam in Maasi including a famous Chariot festival. Maasi Magam was celebrated in a grand way in memory of the event bringing the 7rivers here for Kunti Devi.
On the 12th day of the Visakam Festival in Vaikasi, Kalyana Sundarar in a Glass Palanquin with Sundaragiriyar opposite him makes a trip to nearby villages including Ranganathapuram, Kiliyur, Govindakudi, Aavur, Eri, Panathidal, Maligai Thidal, Mattiyam Thidal, Papanasam, Thiru Palathurai and Uthani. During this procession, Sage Agastya too accompanies the Lord providing darshan to the devotees.
However, with the swindling of the temple lands and the finances relating to the temple in the century gone by, these festivals in recent times have lost its grandeur.
The temple is administered and managed by Thiru Aduthurai Aadheenam

Those born in Magam star pray here to realize their wishes. Also pregnant women pray here by conducting the bangle ceremony for safe delivery. Devotees repay their commitment by tonsuring and performing sandal abishek to Lord and Mother.

How to Reach Kalyanasundaresar Temple Nallur?

The temple is under the administration of Tiruvavaduthurai Aadheenam, situated on the Thanjavur – Kumbakonam road, 3 km east of Papanasam in a village named Vazhai Pazha Kadai.
Thiru Nallur is about 2 kms South off the Thanjavur-Kumbakonam highway near Sundara Perumal Koil. Town Bus every half hour from Kumbakonam and Papanasam till Sundara Perumal Koil. Auto from there will cost Rs. 40. One can also get down at Uththani Railway Gate on the Kumbakonam-Thanjavur highway and take an auto (1km) to reach the temple.
Nearest railway Station is located at Papanasam & Nearest Airport is located at Trichy.