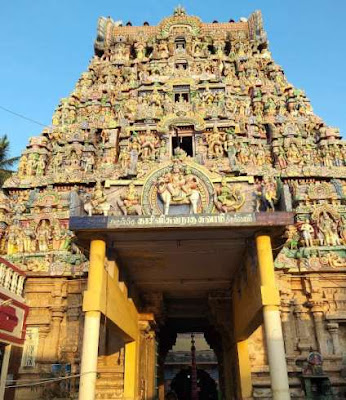 KambattaViswanathar Temple is a Hindu Temple dedicated to Lord Shiva located in Kumbakonam Town in Thanjavur District in Tamil Nadu. Presiding Deity is called as Aadhi Kambatta Viswanathar /Visveswar and Mother is called as Anandhanithi / Nidhiyammai.The temple is one of 12 Shiva temples connected with the Mahamaham festival, which takes place in Kumbakonam every 12 years. It is located on the south western side of the Kumbeswarar Temple.This temple is a favourite temple of the Gold smith community.

Once. Kumbakonam was once dense with Malathi plants. Malathi is a jasmine like flower with five petals which are pointed and twisted at the end. It is used in performing Pooja to Ganesa. The place was earlier known as Malathi Vanam. A sage named Nirsasara lived in a nearby village called Udayagiri. His son Dhoomaketu was a great scholar in the scriptures and other arts. He was always surrounded by aspirants of learning, as students choose the best educational institutions in the country and abroad today. Since they were attentive to his teachings. they also acquired sufficient knowledge in all arts.
Dhoomaketu also took his students on tour to many places of divine importance, particularly Shiva temple, telling them the reputation and history of the temples. During one such visit. he visited this Kambatta Viswanathar temple. Admiring Dhoomaketu’s devotion to him and his righteous teachings, Lord Shin granted darshan to him with Mother. Enjoying Lord’s grace. Dhoomaketu named Lord as Aadhi Kampatta Viswesar and Mother Anandha Nidhi. Lord Shiva named the holy spring here as Dhoomaketu Theertham.

There was a mint facility in this place during the period of Cholas. Hence, the place was called as Kambattam (in Tamil), the place where gold and silver coins were produced.As the temple is situated in the midst of mint facility, the Lord came to be called as Kambatta Viswanathar, Saint Moorka Nayanar engaged himself in gambling in this place.The last consecration of the temple was held on 26 October 2015.
This Temple is facing towards east. The temple is having an entrance arch on the eastern side. Nandavanam can be found immediately after entrance arch. Nandi, Balipeedam and Dwajastambam can be found facing the sanctum but located before the three-tiered Rajagopuram.There is a Nayakkar era conical shaped Mandapam immediately after the Rajagopuram.There is an idol of Dhoomaketu located near the entrance of the sanctum. Presiding Deity is called as Aadhi Kambatta Viswanathar / Visveswar and is facing east.
He is housed in the sanctum in the form of Lingam. Vinayagar, Dakshinamoorthy, Lingothbhava and Brahma are the Koshta idols located around the sanctum walls. Mother is called as Anandhanithi / Nidhiyammai. She is housed in a separate south facing shrine. There are idols of Naalvar and Mangaiyarkarasi (Queen of Pandya King & daughter of Chola King), one of celebrated 63 Nayanmars on the southern side of the temple premises.
There is a mandapam on the western side, housing the shrines of Vinayaga. Murugan and Mahalakshmi. There is a small shrine dedicated to Vinayaga under Vilwa Tree.Theertham associated with this Temple are Balavi Theertham and Dhoomakedhu Theertham. Sthala Vriksham is Jasmine (Malligai).

Purattasi Navaratri, Margazhi Thiruvadhirai, Panguni Uthiram, Masi Maha Shivrathri and Arudhra Darshan are the festivals celebrated here. The visit of Lord Adhi Kampatta Viswanathar along with Mother to Mahamaha Tank on the particular day is grandly celebrated in the temple.

Students pray in the temple for excellence and ranks and goldsmiths pray here for success and prosperity in the profession.