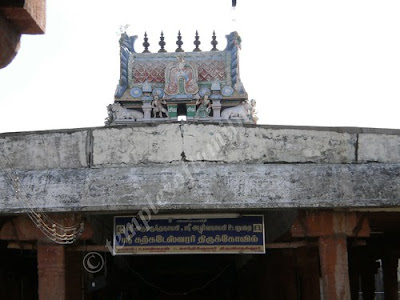 Karkadeswarar Temple is a Hindu temple located at Thirundudevankudi near Veppathur in the Thanjavur district of Tamil Nadu, India. It is dedicated to Shiva. This is the 96th Devaram Paadal Petra Shiva Sthalam and 42nd sthalam on the north side of river Cauvery in Chozha nadu.
Thiruganasambhandar has sung hymns in praise of Lord Shiva of this temple. This is a vast temple surrounded by a moat near Tiruvidaimaruthur. Much of this area is surrounded by fields and shrubs. Close by is the thiruvisalur temple dedicated to Yoganandeswarar (Tiruviyalur). It is speculated that the original name of this now non-existent village must have been Tiru Nandu Devan Kudi.

According to Hindu mythology, Sage Durvasa was engaged in his Shiva Puja when a Gandharva (a community in the celestial world) mocked at his old age appearance. The sage did not mind it. Yet, the Gandharva continued the mischief and even called him by clapping hand moved before him as a cancer-Nandu. Angry sage cursed him born a Nandu. Realizing his folly, he sought the pardon of the sage. He was advised to perform Shiva Puja to gain his original form. He came to this place as a Nandu, bathed in the pushkarani, picked up flowers and worshipped the Lord.
Meantime, Indira the king of Devas also came to this place to perform Shiva Puja as advised by his Guru to acquire a power to conquer the demons. He used to bathe in the pushkarani and did Shiva Puja with 1008 flowers. Every day he found one flower falling short. He saw the Nandu doing puja with one flower. He thought that he was the only one worthy of doing Shiva puja and a Nandu was not qualified for the puja and tried to kill it with his sword.
Lord made a hole in his Linga body to help the creature to escape Indira’s attack. Yet, the Linga was injured by the sword cut. Lord appeared before Indira and said that one cannot succeed by arrogance but by humility alone. As Lord granted salvation to Karkadaga-Nandu, He is praised as Karkadakeswarar.

A Swayambulinga existing in this place then got buried under the sand here. A chola king was ruling this place then. He had an attack of paralysis and no doctor was able to cure him. He fell at the feet of Lord Shiva finally. An aged couple came to his court, gave him the water dissolved with sacred ashes. The king got up completely cured and requested them to stay in the place as royal doctors which they declined. He offered them gifts of gold which too they denied to accept.
When the king asked them what exactly they wished, brought him to this place and asked him to build a temple where the Shivalinga was then and simply disappeared then. The king understood that the visitors were but Lord Shiva and Mother Parvathi and built the temple. People pray to Lord here for relief from disease-Pini in Tamil. Saint Gnanasambandar has mentioned Lord in his hymn as Pini Neekkum Shiva.
Generally, we find only one Ambica shrine in Shiva temples. There are two Ambica shrines side by side. During the construction of the temple, Ambica in the place was lost. Hence, a new Ambica idol was made and installed and named Arumarundhu Nayaki meaning that she came as a medico. Within a few days, the original Ambica idol also was found and installed with the name Apoorva Nayaki. She is the main Ambica of the temple.
This is the temple to seek relief from the Karkadaka-Cancer in English and Nandu in Tamil-zodiac sign comprising of three stars-Punarvasu, Poosa and Ayilya. The hole on the body of the Linga created by the Nandu and the scar caused by Indira is still visible. There is a shrine for Moon-Chandra at the entrance of the temple. Those having problems due to Moon aspects pray in this shrine.

This temple covers an area of over 72,000 square feet.The legend of a crab offering worship to Shiva is depicted in a panel on a stone pillar. This ancient brick and mortar temple was converted to a stone temple during the rule of Kulottunga I (1075-1120).TheAmbal shrine also came into being then, as seen from inscriptions from the year 1117. Inscriptions from the period of Vikrama Chola and Rajadiraja II are also seen here. No later inscriptions are seen, and the temple seems to have gone into a state of insignificance after the Chola rule.
It is believed that the vegetation covering the temple may be of medicinal value. It is speculated that in the days of its glory, this village would have been a medical care center with an Ayurvedic dispensary, providing herbal remedies to various ailments.
The Festival images from this temple have been stored at the Tiruviyalur temple, nearby.Tiruviyalur is associated closely with Rajaraja Cholan I, the great Chola monarch.This temple is in a dilapidated state. The original temple was built with brick and mortar which was later converted into a stone temple. There are 2 shrines for the female deity, one for Arumarundunayagi and the other one for Aravindanayagi.
Sri Vinayaka of the temple is worshipped as Karkadaka Vinayaka. Lord Muruga with his consorts Valli and Deivanai graces from a shrine in the prakara. Lord Nataraja appears in a Sudha Sculpture. There is no shrine for the Navagrahas the nine planets. As Indira realized his mistake and corrected (Thirundhuthal in Tamil), the place is named Tirundhudevan Kudi, the name is not familiar with the people of the locality. They know the place as Nandu Koil only.

The temple is open from 9.00 a.m. to 1.30 p.m. and from 4.00 p.m. to 7.00 p.m.
Singers
Saint Tirugnanasambandar had praised the glory of the Lord in his Thevaram hymns. Lord in the Tirundhudevan Kudi temple should be approached by those in need of medicines, mantras and teachings for a righteous life, says the saint in his hymn. This is the 42nd Shiva temple on the northern bank of Cauvery praised in scriptures.

Devotees perform gingely oil abishek to Lord Karkadeswarar for relief from adverse planetary aspects. They also consume this oil as a medicine for diseases if they have. People perform special pujas to Lord and Mother and offer vastras.

Maha Shivrathri in February – March and Tirukarthikai in November – December are the festivals celebrated in the temple.

Thiruvisayanallur is a village near the town Kumbakonam. This temple is located I km from northern side of Poompuhar Road and southern side of Chennai Road.
Sivayoginathar Temple and Sundareshwarar swamy temple (Petti kali Amman) Karuppoor are located nearby to this temple.
Tirundhudevan Kudi is II km far from Kumbakonam on the Suriyanar Koil route. The visitor has to reach Tiruvisainallur from Kumbakonam. The temple is 2 km from here. Autos are available. Charge is Rs. 40/= to and fro. Nearest Railway Station is located at Kumbakonam & Nearest Airport is located at Trichy.