🛕 Kothandarama Temple is located in Ayodhyapattanam in Salem District in Tamilnadu. Here Rama is seen in a Pattabhisheka Kolam. It is located about 10kms East of Salem on the Tiruppattur / Athur – Vriddhachalam highway. It was built during Tirumala Nayak period in 17th Century AD.

🛕 The story goes that at the conclusion of the battle with Lankan king Ravana, Rama came here and stayed along with Sita for a day. On the request of Vibheeshana, he is believed to have provided darshan in a Pattabhisheka Posture as a result of which Sita is seen to the left of Rama at this temple. Vibheeshana is seen standing opposite Rama and Sita offering his prayers to them and in a posture of invoking their blessings.

🛕 It is located on a 1 ½ acre area; the temple was built during the rule of Tirumala Nayak in the 17th Century AD. On the Eastern entrance is a 5 tier 150 feet high Raja Gopuram. As one enters the prakara of this temple, there is a spacious Maha Mandapa where one finds pillars of good workmanship. One finds several artistic sculptures inside the temple that dates back to the Nayak Period.

🛕 On the North Eastern corner of the mandapa are three musical pillars. Cornices and Horse Pillars are reminiscent of the Madura Style of Tirumala Nayak period. On a single pillar on the Eastern corner are Dasavathara carvings.

🛕 Four figures carved in the Maha Mandapa are believed to represent Tirumala Nayaka, his wife and two sons. On the upper wall of the Maha Mandapa are several Mooligai Paintings. A unique feature at this temple is that Rama is seen in a sitting posture with his left leg placed on his right thigh. Alongside Rama and Sita inside the sanctum are Lakshmana, Bharata, Shatrughna and Anjaneya. Utsavar idol is Kothandarama.

🛕 In centuries gone by, the temple had Vahanas of Anjaneya, Horse and Elephant as well as a palanquin. The 20feet high wooden chariot is currently in a dilapidated condition.

🛕 10day Rama Navami and Hanuman Jayanthi are celebrated in a grand way at this temple.

🛕 This place is well connected to Salem by Road. Direct buses every 15 minutes to the temple from the Salem Old bus stand. One can also take Thirupattur & Athur/Vriddhachalam bound buses to reach Ayodhyapattanam (will take 45minutes from Salem New Bus Stand). 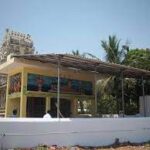 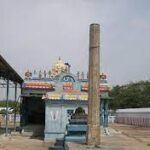 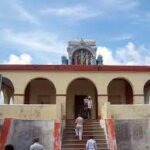