🛕 Luz Anjaneya Temple is a Hindu Temple dedicated to Lord Hanuman located in Luz in Mylapore in Chennai City in Tamilnadu. It is the oldest temple of Hanuman in the city of Chennai, India. This temple is also called as Thanneerthurai Hanuman Temple as once the place was called Thanneer Thurai.

🛕 The Luz Anjaneya temple was constructed by Salivahana Chettiars from Mysore who migrated and settled down in Mylapore in the 18th century. With land granted by the Nawab of the Carnatic, the Chettiars constructed two Vinayaga temples. While digging a well, they found the self-manifested idol of the Hindu god Hanuman. As a result, they constructed a Hanuman temple on the spot.

🛕 There is a modern history attached with this temple. Usually literature legends place their scripts in a temple before it goes to other’s hands, Rajaji who rewrote Ramayana in Tamil has placed his first script here in this temple.

🛕 The temple is located next to Sanskrit College, is one of the oldest Hanuman temples in Chennai City. Although the temple is very small and the idol of Hanuman is also small, the temple is always crowded by the devotees. The temple, which is around 300 years old, has Hanuman as the presiding deity. There are two shrines in the temple – one dedicated to Ram-Lakshman-Sita and another shrine dedicated to Krishna-Rukmini-Bhama. A shrine to the Hindu god Rama was constructed within the complex in 1954. The temple celebrated its 200th anniversary in 2000.

🛕 The Anjaneyar Temple is located opposite to the Appar Swamigal Temple and next to the Sanskrit College / vegetable market (Royapettah High Road). The Temple is located at about 200 meters from Sanskrit College Bus Stop, 650 meters from Mylapore Bus Stop and 350 meters from Mylapore Railway Station. Mylapore is located a few kilometers to the south of the British-built Chennai city. It lies between Triplicane and Teynampet in the west then across to the coast in the east. It is bounded by Royapettah to the north. Its southern frontier corresponds roughly with that of the River Adyar. 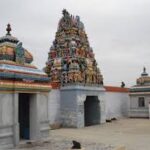 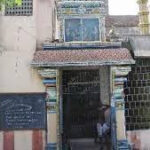