🛕 Mahamaham Tank is a huge temple tank located in Kumbakonam Town in Thanjavur District of Tamil Nadu. It is considered to be the foremost and one of the largest temple tanks in Tamil Nadu. It covers an area of 6.2 acres and is trapezoidal in shape. The tank is surrounded by 16 small Mandapams (shrines) and has 20 wells inside the tank. Maha Maham Festival is an annual event that occurs in the Tamil month of Masi (February–March) in the star of Magam. Once in twelve years, when the planet Guru (Jupiter) enters the sign Simha (Leo), the Kumbh mela festival of South India is celebrated at Mahamaham tank. It draws close to 2 million visitors.

🛕 According to Hindu mythology, at the end of every Yuga, there is a huge flood called Maha Pralayam occurs and the whole world immerses in a deluge on account of the wrath of Hindu god Shiva for the sins committed by humans in earth. Lord Brahma prepared himself for the next cycle of creation. He put all the seeds from which creation would sprout in amrita (the elixir of immortality) along with four Vedas and Puranas and kept them together in a clay pot. On top of the pot, he placed a coconut with mango leaves and wrapping around the pot’s neck a sacred thread. He then placed the pot on the peak of Mount Meru in the Himalayas.

🛕 When the Maha Pralayam started, it destroyed all living creatures on the earth. The Amutha Kalasa also got displaced and started floating on the seas for years. Eventually when the Pralayam stopped, the Kalasa settled in Kumbakonam. Then Lord Shiva took the form of a hunter (Kirata Murthy) and split open the pot with his arrow. The life on earth started flourishing again. It is believed that when Lord Shiva opened the pot with his arrow, the pot broke and fell in various places across the earth. Each of these items became Shiva Lingas and temple has been established later.

Adi Kumbeswarar Temple (place where the Amrutha Kalasa stayed). It is believed that Lord Kirata Murthy (Lord Shiva) himself made a Shivalingam with the broken pieces of the Kalasa by mixing nectar and sand with it. He worshiped this lingam and stayed back in this place.The Shivalingam is in the shape of the neck of a pot (Kudamukku in Tamil).

Gauthameswarar Temple (place where the sacred thread of Kalasa fell).

Koneswarar Temple, Kudavasal (place where the rim of the Kalasa fell)

Sakkottai Amirthakalasa Nathar Temple (place where the mid-portion of the Kalasa fell). Since the pot (locally called kalayam) arrived here, it was called Kalayanallur.

Banapureeswarar Temple (place where Lord Shiva broke the Kalasa with his arrow).

Aadhi Kambatta Viswanathar Temple (place where the flowers of the Kalasa fell).

Kalahastheeswarar Temple (place where Chandan of the Kalasa fell).

Ekambareswarar Temple (place where the balance items of Kalasa feel).

Kottaiyur Kodeeswarar Temple (place where some drops of the nectar fell).

🛕 The nectar from the Kalasa is believed to have reached the Mahamaha Tank and Potraamarai Tanks. This nectar is also believed to have spread around an area of about 24 Kms. Since the Kalasa (also called Kumbham) settled in this place, the place came to be called as Kumbakonam. Brahma prayed to Shiva to allow pilgrims to visit the tank during the sacred occasion. Shiva acceded to the demand and is believed to arrive along with Vishnu and other celestial deities at the centre of the tank.

🛕 Astronomically, when the planet Jupiter passes over Leo on the day of the festival, it is believed to bring all water bodies together and enrich the tank with minerals. Similarly, a lake in Kotihar in Jammu and Kashmir gets full supply of water the same day, which otherwise remains empty during the other 11 years. Since Brahma reconstructed the world after the last deluge, there is a temple dedicated to him in Kumbakonam, though he is cursed not to have any temple for him anywhere else.

🛕 The antiquity of the Mahamaham is deduced from the architectural and epigraphical patterns. In the northern bank mandapa, there is an inscription of Tulapurshadana, a practice of weighing oneself against gold. The ceremony is observed during various times like equinoxes, commencement of an era (Yuga) and its ending, eclipses and Makara Sankranti. The ceremony is usually performed in sacred places like temples, rivers and tanks. The amount of gold thus weighed is distributed among deserving men. Govinda Dikshitar, the chieftain of Raghunatha Nayak of Thanjavur, constructed the sixteen Mandapams and stone steps around this tank. The visit of Krishandevaraya during 1445 to attend the Maha Magam festival is recorded in an inscription in the gopuram of Nagalapuram and is also recorded in the inscription found in the Shiva temple in Kuthalam.

🛕 The tank is located in the heart of Kumbakonam town. It covers an area of 6.2 acres and is trapezoidal in shape. The tank is surrounded by sixteen small Mandapams (shrines) and has 20 wells inside the tank. The names of the wells carry the name of Hindu god Shiva or that of Rivers of India. Govinda Dikshitar, the chieftain of Raghunatha Nayak of Thanjavur, constructed the sixteen Mandapams and stone steps around this tank.

The Tank has 20 wells inside the tank. They are

🛕 It is believed that taking dip or sprinkling water of the tank on the bodies cleanses all the sins.

🛕 The Mahamaha Tank has four streets along its four banks. It is constructed with steps on the sides for people to easily access the tank and take dips. There are 16 Mandapas (Gopuram Towers) around the corners and sides of the tank. These towers are considered to be forms of lord Shiva.

🛕 Maha Maham Festival is an annual event that occurs in the Tamil month of Masi (February–March) in the star of Magam. Once in twelve years, when the planet Guru (Jupiter) enters the sign Simha (Leo), the Kumbh mela festival of South India is celebrated at Mahamaham tank. Vast crowds gather at Kumbakonam to have a dip in the tank, along with saints and philosophers. All the rivers of India are believed to meet at the tank on this day and a purificatory bath at this tank on this day is considered equal to the combined dips in all the holy rivers of India.

🛕 Festival deities from all the temples in Kumbakonam arrive at the tank and at noon, all the deities bathe along with the devotees – it is called “Theerthavari”. The purificatory bath is believed to remove sins and after the dip, pilgrims offer charitable gifts in the hope of being rewarded in the current life and subsequent lives. The temple cars of major temples in Kumbakonam come around the city on the festival night. The last Mahamaham was celebrated on February 22, 2016 with over a million people from various places taking the holy dip in the Mahamaham tank.

🛕 Temples connected with Mahamaham festival which happens once in 12 years in Kumbakonam. They are;

🛕 On the Mahamaham day, people start with praying these Siva temples. This is continued by dips in the 20 wells, visit to Kumbeswarar Temple, dip in the holy tank and finally in Kaveri river to complete the process. On the occasion of the festival, metal idols of the deities of the main temples of Kumbakonam is carried on palanquins or chariots and taken around the different streets of the town. There is an oft quoted popular saying in Sanskrit noting Kumbakonam as even as more sacred than Varanasi (Kasi). A sin committed at some ordinary place is washed off by a visit to a holy place, sin done in a sacred spot is washed off by going on a pilgrimage to Varanasi (Kasi). If one dares to commit a sin in that sacred city too, that sin is wiped off at Kumbakonam and any sinful act done at Kumbakonam is atoned there itself.

🛕 Twelve famous Shiva temples in and around Kumbakonam participate in the famous Maha Maham festival during which Theerthavari happens in the Mahamaha Tank. This festival is celebrated once in 12 years in Kumbakonam.

These 12 Shiva temples are

🛕 Of them 10 temples are in Kumbakonam. The processional deities of these temples come to this tank during festival days.

These Vaishnava temples are

🛕 “Let all of you this very day go to Kumbakonam, a spot dear to me and to Vishnu and bathe there is the nectar full tank created by the directions of the Parabrahman. Do bathe in the presence of Kumbesvara in Vrishabha lagna on this Mahamagam day, the full-moon day combined with Mahga star with Jupiter in the sign of Leo. Thereby you will get rid of all your accumulated sins and regain power to wipe off the sins of others”

🛕 Sekkizhar, Saint Author of Periyapuranam Notes the Holy Rivers as;

🛕 Meaning a dip in the holy tank on the Mahamaham day is equivalent to dip in all holy rivers and leads to worldly prosperity.

🛕 Appar, the 7th-century saint poet mentions the subtle presence of holy rivers like the Ganges in the Mahamaham tank in Thiruthandakam. 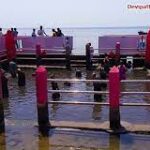 Gods Days of the Week - Which days are for which Hindu God?