In Hinduism, Temples are considered not only as a place for spiritual rituals but also the place where we preserve and showcase our traditions and culture. Temples are always regarded as an embodiment for calming and relaxing our minds, thereby spreading zeal. During ancient times, Kings and Emperors built temples to showcase their patriotism towards the Lord Almighty, as a remembrance of their victory in a war and to mark their place in history by flaunting their artistic skills. One such unavoidable temple in history which amazed the world is the Mahabalipuram Temple.

Mahabalipuram, also known as Mamallapuram is a shore Temple built during the reign of the Pallava King Mahendra Varman and Narasimha Pallava. Mamallapuram Temples are famous for its stone sculptures, cave temples, beach temples and monolithic chariot. This temple showcases the stories in literature, epic battles, the giants and animals as realistic as it can be. The Mahishasura Mardini Sculpture which amazed the people is present here. Millions of people from all over the world come for these all year round.

Mamallapuram is located 56 km to the south of Chennai on the coast of the Bay of Bengal in the Chengalpattu district. This city, which is regarded as the pride of Tamil Nadu, was a port about two thousand years ago. The Pallava kings who ruled the Kanchipuram in the 7th century AD were largely responsible for the development of the town. The port played a prominent role in trade during the reign of the Pallava king Narasimha Varman I (630 – 668 AD).

The Pallava King Narasimha Varman is popularly known by the name “Mamallan” and the port is called by his name as “Mamallapuram”. In the long run, the term Mamalai has become “Mamallapuram” and it is by mistake we call it Mahabalipuram. The port, which has been in existence for centuries, is believed to have been destroyed by seawater intrusion.

Although Mamallapuram may seem small today, its glory is world-renowned for its sculptures. The Pallava Kings Mahendra Varman and Narasimha Varman are credited with paving the way for a novelty in temple art by setting up cave temples in the rocks. Narasimha Varman I (630-668), son of Mahendra Varman I, followed his father and built rock-cut temples at Mamallapuram. Apart from these, they also introduced the novelty of carving out mountains and constructing cut-out temples.

The construction of these innovative stone temples and open carvings at Mamallapuram was continued by the Pallava kings who succeeded Narasimha Varman I and was completed in several stages. The Pallava kings Mahendravarman II, Parameswara Varman I and Rajasimhan II (also known as Narasimhan II) were involved in this work. Inscriptions show that the contributions of Rajasimhan II dominate in completing the Mamallapuram Temple. These temples are built entirely of stone from the ground floor to its plane.

Thus the Pallava kings built four types of temples at Mamallapuram, namely cave temples, cut temples, rock sculptures and construction temples, and turned the port into a sculptural repository. Many of the works are unfinished due to the invasion of the Chalukyas etc. and are found in some damaged condition.

The Mamallapuram Sculptures and Temples were neglected till the reign of Vijayanagara Kings. When the British came to Mahabalipuram at the end of 18th century, the temples and sculptures were in a state of despair. The British paid much attention to the restoration and preservation of these sculptures. Later, the temple came under the protection of the Archaeological Survey of India.

Built in the 7th century AD, the temple is dedicated to Lord Vishnu and Lord Shiva. The temple has bright lights such that it can be seen even at night. This is one of the oldest temples in South India and is guarded by 13 stone masons.

The planes of the temple were completely made out of stones. These stone planes and the lion sculpture are masterpieces of art. The temple is an ancient monument and no worship is done here. It is our duty and responsibility to protect the salinity of the seawater from damaging this temple. 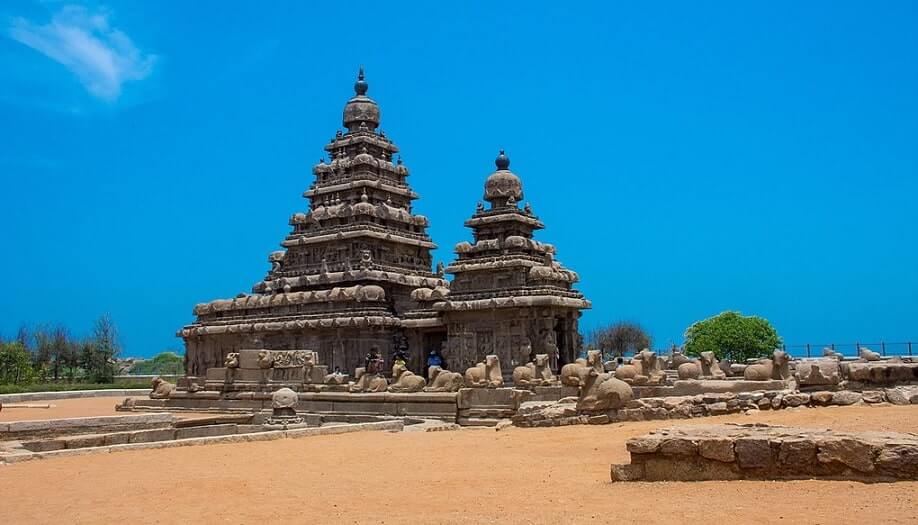 The whale-shaped rock measures 27 meters in length and 9 meters in breadth. It is the largest collection of sculptures in the world in which gods, deities, humans, monsters, birds and insects are carved with great artistic elegance.

In the middle of Mamallapuram, near the Thalasayanap Perumal temple, there is a sculpture called ‘ Arjunan Thavam ‘. Arjunan Thavam is an event in Mahabharata says that Arjuna received a weapon called ‘ Basupadam ‘ from Lord Shiva out of great penance to fight with the Kauravas and the Arjuna Thavam is sculpted as described by the Gupta-era poet Baravi in ​​his book ‘Kiratarjunyam’. Arjunan penance is considered as a ‘sculptural miracle’.

About 100 sculptures of Lord Shiva, gods, humans, elephants, lions, deer, animals and birds can be seen in the ‘Arjunan Penance‘ sculpture. Arjuna Penance is an excellent art treasury. It is admired by all the artists of the world.

The temples carved out of the same stone in five different styles are called the five chariots. Four of these five chariots are considered to be built of single stone each. The images of the Gods are very neatly carved on the walls of these chariots.

These Sculptures of Five Stone Chariots is located about 2 km from the beach temple and the names of the Five Chariots are as follows:

The chariots are generally used to bring the temple deities to the streets during the time of festivals. Mamallapuram stone chariots have the same structure of the usual chariots. It is believed that these five chariots were set up by cutting and carving a naturally occurring hill and that the top of the Dharmaraja chariot must have been the top of the hill. 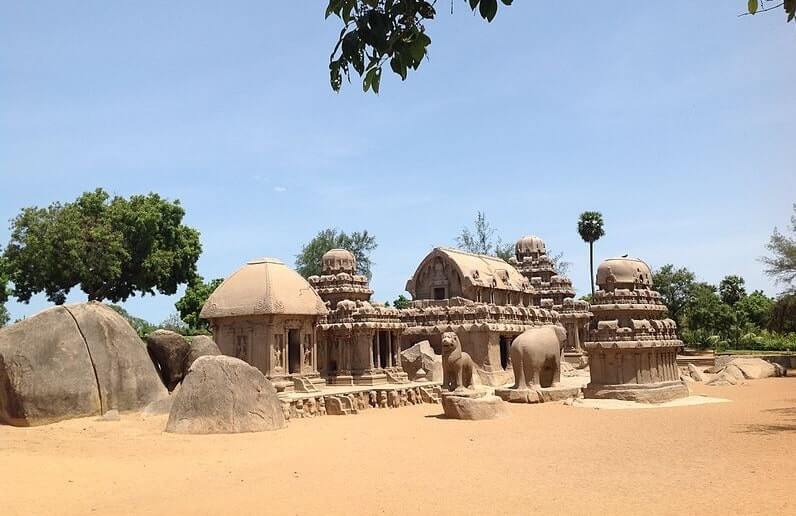 These chariots bear the names of Panchapandavar and Draupadi from Mahabharata. Despite having the names of the Panchapandava, these are actually the temples dedicated to the deities like Shiva, Vishnu, Durga etc.

Near the five stone chariots, there are the beautiful sculptures of an elephant, a lion and a Nandi (Holy Bull).

Other Chariots of Mamallapuram

Apart from the five stone chariots, there are four more stone chariots at Mamallapuram. One of them is the Ganesha chariot. This chariot is located near the Arjunan Penance sculpture. After crossing the town of Mamallapuram, there are 2 Pidari chariots on the Mamallapuram-Thirukalukundram road dedicated to the Goddess Pidari. To the south of these chariots, is the chariot opposite the pool called Valaiyan Kuttai and hence the chariot is called as Valaiyan Kuttai Chariot.

The cave temples and cave hall walls are adorned with beautiful sculptures depicting mythological performances. The wall of Mahishasuramartini Mandapam showcasing a scene of Mahishasura Mardini killing a buffalo-headed monster on one side and the sleeping posture of the Lord Vishnu on the other side are of great religious and artistic significance. 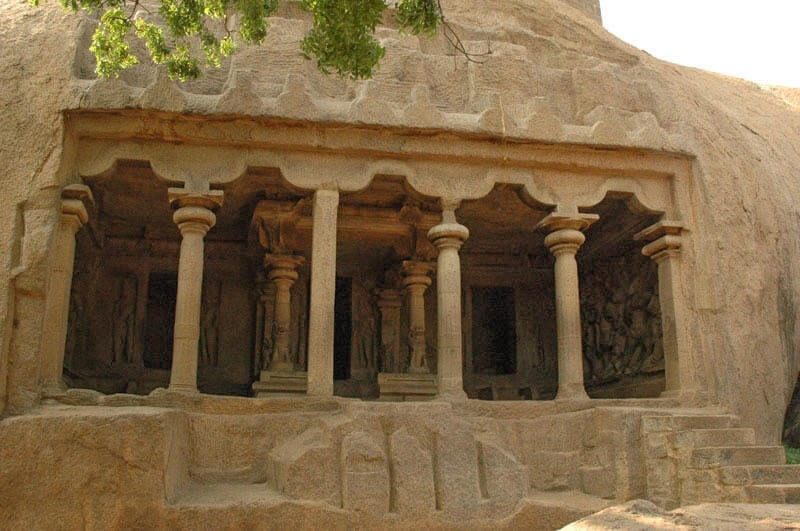 The sculptures of the Krishna Mandapam depict an event from the life of Lord Krishna. It tells the story of Lord Krishna moving the Govardhana hill, holding it like an umbrella and giving shelter to people and cattle suffering in the rain caused by the action of the angry Indra.

Varaha Cave is a small hall carved in a single stone like a hollow bridge that stands in four sections. 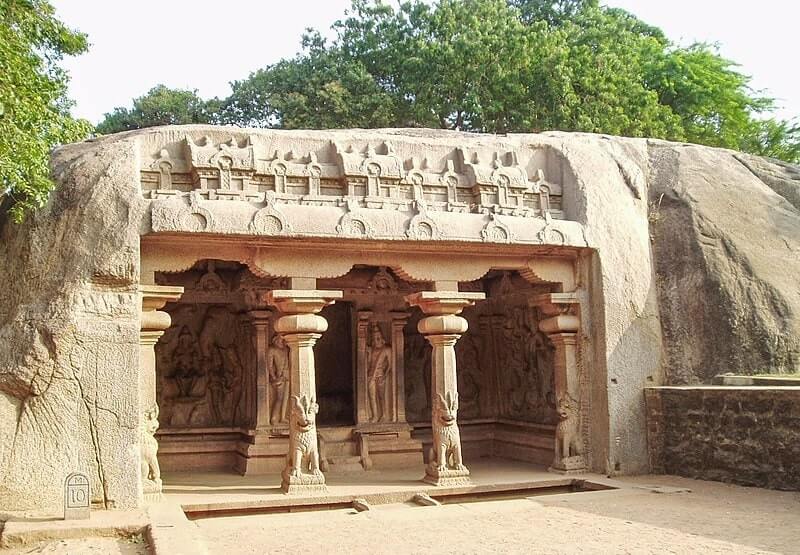 The Tiger Cave is carved out as an open-air arena for Pallava cultural events and many beautiful ancient sculptures can be seen there. It is located at a distance of 4 km from Mamallapuram.

The Talasayana Perumal Temple is located at a short distance from the Arjunan Thavam sculpture and was built during the reign of the Vijayanagara kings who ruled over Chandragiri. Near the temple, there is an unfinished Vijayanagara Raiya tower. 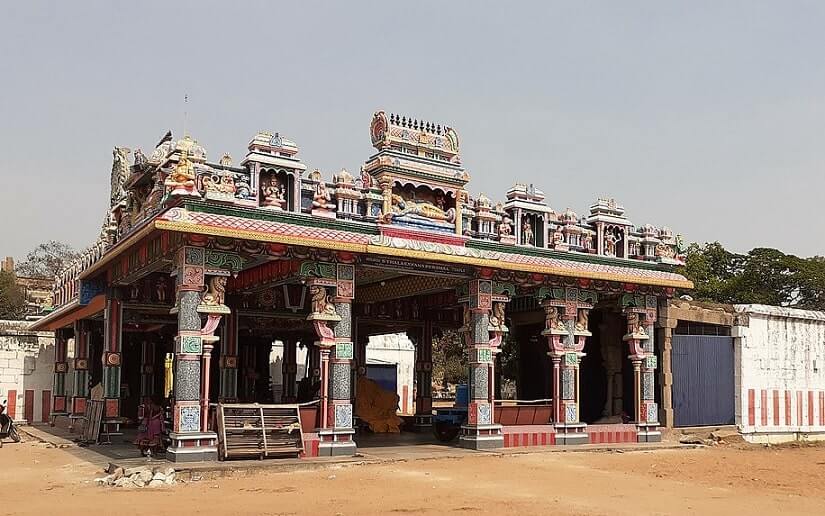 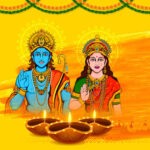 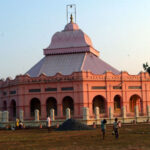