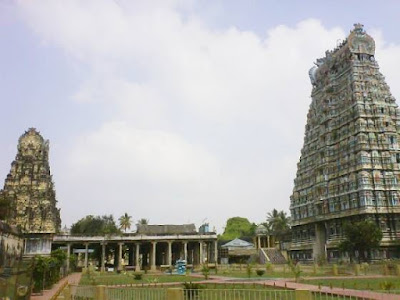 Rajagopalaswamy temple is a Vaishnavite shrine located in the town of Mannargudi in Thiruvarur District of Tamilnadu. The presiding deity is Rajagopalaswamy, a form of Lord Krishna. The temple is spread over an area of 23 acres (93,000 m2) and is one of the important Vaishnavite shrines in India. The temple is called Dakshina Dwaraka (Southern Dwaraka) along with Guruvayoor by Hindus.
The temple was first constructed by Kulothunga Chola 1 (1070-1125 A.D.), with bricks and mortar, indicated by various stone inscription found in the site. Later renovated by Thanjavur Nayaks, Hoysalas and Vijayanagara Kings during the 16th century.The temple has three inscriptions from the period and also mentioned in the religious texts.A granite wall surrounds the temple, enclosing all its shrines and seven of its nine bodies of water.The temple has a 154 ft. Rajagopuram, the temple’s gateway tower.
Haridra Nadhi, the temple tank associated with the temple is outside the temple complex and is considered one of the largest temple tanks in India. Pundarikakshan is believed to have appeared as Krishna to sages Gopilar and Gopralayar. Six daily rituals and three yearly festivals are held at the temple, of which the chariot festival, celebrated during the Tamil month of Panguni (June-July), being the most prominent. The temple is maintained and administered by the Hindu Religious and Endowment Board of the Government of Tamilnadu.

The temple was first constructed by Kulothunga Chola I (1070-1125 A.D.), with bricks and mortar, indicated by various stone inscription found in the site.The place Mannargudi is termed Sri Rajathi Raja Chathurvedhi Mangalam and the town started to grow around the temple. Successive kings of the Chola empire, Rajaraja Chola III, Rajendra Chola III and kings of Thanjavur Nayaks, Achyuta Deva Raya expanded the temple. The temple contains inscriptions of the Hoysala kings and some Vijayanagara grants, and many records of the later Nayaks and Marathas. The Thanjavur Nayaks made the temple as their dynastic and primary shrine and made significant additions.
The current temple structure, hall of 1000 pillars, main gopuram (temple gateway tower) and the big compound wall around the temple was built by the king Vijayaraghava Nayak (1532-1575 A.D.). Raghunathabhyudayam, a doctrine by Nayaks explains the donation of armour studded with precious stones to the main deity by the king. He erected the big tower in the temple so that he can view the Srirangam Ranganathaswamy temple from the top of Mannargudi. The Nayaks were specially interested in music and it was promoted in both the temples. Instruments like Mukhavina, Dande, Kombu, Chandravalaya, Sheri and Nadhaswaram were commonly used in the temple service.
According to historian K.V. Soundararajan, the Ranganatha temples in South India built during the 9th and 10th centuries have a systematic arrangement of subsidiary deities as seen in this temple along with the Appakkudathaan Perumal Temple at Koviladi, Sowmya Narayana Perumal temple at Thirukoshtiyur, Veeraraghava Perumal Temple at Mannargudi and Rangantha temple at Srirangapatna. This place is also known as Champakaaranya Kshetram.

When cruel Kamsa put his own sister Devaki and her husband Vasudeva in prison, Lord Vishnu appeared before them and assured that he would be born to them. This is his first Leela-divine play Krishna Leela. His life in Gokhulam as a shepherd was the 32nd Leela. Based on these events, the presiding deity is Vaasudeva and procession deity as Rajagopala. While opening the Vaasudeva shrine in the morning, Gopuja-cow puja and Gaja puja-puja to elephant are performed.

Reason behind the name Mannargudi

Procession deity is also called Rajamannar, hence the name of the place Mannargudi.

Lord Holding  a Tusk in his Left Hand

Lord Krishna arranged a competition among the Gopikas bathing in Yamuna River. The contest was that they should dress properly and wear the jewels after the bath. One Gopika could not find one of her ear ring. They found it at last in the ear of Krishna and were excited with joy to see its beauty in his ears. Based on this event, Lord in the temple has a Thadanga-ear ring in one ear and Kundalam-ring in the other.

During the Krishnavatara, there were two sages in the south named Gopilar and Gopralayar. Hearing the Leelas of Lord Krishna they set out to see him in Dwaraka. Maharshi Narada met them on the way and told them that Krishnavatara had ended and Lord had returned to his abode. The sages fell fainted on hearing this news. Maharshi Narada woke them up and consoled them. As advised by Narada, they began penance to have lord’s darshan. Lord appeared before them as Krishna in all his 32 Leelas. As requested by the sages, Lord stayed in this place.

Thirumangai Azhvaar Visit to this Temple

It is said that the Lord here gave darshan to Brahmma in Kritha Yugam, to Brugu Rishi and Goddess Mahalakshmi in Tretha Yugam, to Agni, Gopila and Gopralaya Rishi (children of Rishi Vahnimugar) in DwaparaYugam and to King Rajasekhar in Kali Yugam.
Significance of the  place — Staying  here for a Night
In the Mahabharata, Pulasthya tells Bheeshma that anyone staying for a night at Mannarkoil earns the merit of having gifted a 1000 cows, such is the significance of this place.
It is believed that the Lord gave darshan in 32 different forms to the 2 Rishis here.The first of that was Paravasudeva (Moolavar here) and the last was RajaGopalan (Utsavar).These 32 forms are displayed in a colourful form around the main Sannidhi at this temple.
The temple elephant Shengamalam takes a 10 km walk every day to keep herself fit. With 32 villages around this temple, the elephant walks to one village every day. Interestingly, Shengamalam does not eat plantains like other temple elephants. She has a special liking for biscuits.

The temple priests perform the pooja (rituals) every day, including festivals. Like other Vishnu temples of Tamilnadu, the priests belong to the Vaishnavite community, a Brahmin Sub — Caste. The temple rituals are performed four times a day; Kalasanthi at 8:30 a.m., Uchikalam at 10:00 a.m., Sayarakshai at 6:00 p.m. and Ardha Jamam at 8:00 p.m. Each ritual comprises three steps; Alankaram (decoration), neivethanam (food offering) and Deepa aradanai (waving of lamps) for the presiding deity.The worship involves religious instructions in the Vedas (sacred text) read by priests and prostration by worshippers in front of the temple mast. There are weekly, monthly and fortnightly rituals.
The major festivals celebrated in the temple are I8-day Panguni Brahmotsavam. Duration of Kurukshetra war was 18 days. Srimad Bhagwat Gita has 18 chapters in the immortal Mahabharata epic. This is a famous festival in the temple. Lord appears in 32 types of Alankaras representing his 32 Leelas. The Butter Pot festival is celebrated on the 16th day when Lord comes in procession as crawling baby with butter in hand. That is also offered as Nivedhana. After the Alankara, when Lord comes to a mandapam in the place, people throw butter balls. He returns to the temple in horse vaahana in the evening. During this festival, Lord also appears as Sri Andal, on two faced bird named Kanda Peranda Pakshi and as Sri Rama dressed in stark on the Pancha Mukha Anjaneya vahanam. The festival deity is placed in the Punnai tree, the branches of which are hung with garments and ornaments.
Mother Sengamala Thayar blesses the devotees from a separate shrine. Special Tirumanjanam is performed to her on Poosam Star day-Mother’s birth star. On the fourth day of Thai month-January-Lord and Mother appears together on a single throne. Garuda is in female form before Mother’s shrine. Those facing problems in marriage and concerned with the welfare of children, light ghee lamps to Garuda. Though this is a Perumal Temple, Maya, born before Krishna is blessing here as Durga in the Vaasudeva Perumal ghoshta. Special pujas are performed here at Rahu Kalam time. Devotees tie cradles here seeking child boon. Milk is the main Nivedhana for Lord. This is given as Prasad also. As in Madurai Kalazhagar temple, Dosa is the Nivedhana here only in evening pujas.
The chariot festival is the most prominent festival of the temple and the surrounding villages. It is celebrated during the Tamil month of Panguni (April—May); devotees pull a chariot round the streets of Mannargudi.Verses from the Nalayira Divya Prabandham are recited by a group of temple priests and music made with nagaswaram (pipe instrument) and tavil (percussion instrument) is played. Vaikunta Ekadasi during December—January, summer festival in Chithirai —Vaikasi (April to June), Oonjal festival for Rajagopalaswamy in Masi (February-March), Aadi Pooram (July-August), Navarathri during September—October and butter pot breaking ceremony (locally called uri adi) are the other festivals celebrated in the temple.

The daily temple poojas are performed in a very systematic and traditional manner right from Vishwaroopam at Sam. with the temple elephant and the cow showing their devotion to the Lord. One is the temple elephant going down on its knees to pray before Lord Raja Gopalan and then lifting its trunk to shower water on the Lord – a beautiful sight to watch so early in the morning. And this is possibly the only Vaishnavite temple in Tamilnadu that opens at Sam and has theVishwaroopam Darshan in a formal way like it once used to be in all the temples.

It is the staunch faith of the devotees that prayers to Lord Rajagopala-Vaasudeva would bless them with prosperity in life, happy wedding. removal of adverse aspects on children, health of cattle and all happiness. Devotees perform Tirumanjanam to Lord and Mother and donate cows.