🛕 Though the temple is small, the miracles of the Amman are countless. In the month of Aadi, the temple is busy throughout that month, as people, from far and near come to worship the Amman and to perform special prayers rituals to her. This is the holy place where Vayilar, one of the Nayanmar and Peyalvar, one of the Aalvaars were born. The Temple is Administrated by Hindu Religious and Charitable Endowments Department of Tamil Nadu.

🛕 Sanctum In the olden days, there was a lotus pond in this place. Under the Banyan tree in the banks of this pond, Ambal manifested herself in Swayambu form. In the beginning, the devotees erected a small hut as sanctum for Ambal and worshipped her. Later, an elaborate temple was structured. Still Prime sanctum continues to be the hut. It is said that Ambal in order to indicate simplicity lives in the hut and graces us.

🛕 The classical Tamil literature speaks of Kottravai worship, a cult existed during the age of Tholkappiam and Silapathikaram. This temple is also presumed to have worshiped as Kottravai once.

Mundakkanni Amman is said to be a form of Saraswathi

🛕 Mundakkanni Amman is said to be a form of Saraswathi who blesses people to excel in their fine arts.

🛕 Amman is also known to relive Naaga Dhosham, as the temple is the residing place of snake anthill along with banyan tree behind the sanctum sanctorum of Amman, and it is believed that nagam (Snake) still worships Amman every day.

🛕 This is an east facing temple with a small 3 tiered gopuram at the entrance. Presiding Deity is called as Mundaka Kanni Amman. The Ambal is Swayambu and appear with twin arms and donned with serpent crown. There is a small Vimanam constructed above her, in which Dwara Palakis (female doorkeepers) are depicted. During the abishekam performed from morning 6.00 to 11.30 we can worship the Swayambu form of the Amman. A fee of Rs.150/- is collected from the devotees to participate in the abishekam function.

🛕 The significant feature is of the trident, the primary weapon of Devi, seen at the center of the Swayambu form. Therefore, till date the main shine is having the thatched roof and housing upkeeping the old style never renovated as modern. Since the Deity is both the form and formless (having just the head only) – like a lotus – the Deity bears the name “Mundakam” which means lotus in Tamil.).

🛕 The traditional belief is that Mundaka Kanni Amman holds the power of the Trinity – Siva, Vishnu and Brahma. The Banyan tree is behind Ambal’s sanctum. Within the tree is the snake-cove and beside the tree is the sanctum of Naaga Devathai. Those with serpent-curse, worship the Naaga Devathai by offering milk, rose-water, turmeric abishekam and by lighting ghee-lamp.

🛕 On the left of the Prime sanctum, there is shrine for the procession Ambal seated on the throne, flanked in both sides with Simha Vahanam – lion carriers. Sapta Kannikas (the seven virgins) Brahmi, Maheswari, Vaishnavi, Varahi, Kaumari, Indirani and Chamundi in the sculpture forms can be seen in front of Amman Sanctum. Sapta Kannikas appearing in the Linga form can be found in the prakaram. Jamadagni Maharishi and his son Parasurama are seen as security gods on both their sides.

🛕 Lord Vinayaka under the pipal tree can be found in front of the Temple. Those with serpent-curse install Nagar (serpent) images under this tree. There are shrines for Kashi Vishwanathar, Vishalakshi, Dakshinamurthy, Mariamman, Ganesha, Gnana Jyoti Narthana Vinayagar, Murugan, Aiyappan, Veera Anjaneya, Ramalingaswami, Navadevatha (a shrine of snake god) in the temple.

🛕 The Temple celebrates the whole of Aadi and Thai months, Chithra Pournami, Chithirai, Vijaya Dasami, Navarathri, Aadi Pooram and Last Friday of Thai Month. Generally, Annabishekam is performed to Lord Siva on the Aippasi Full Moon day. But, it is quite significant that Annabishekam is performed to Amman in this sacred place. The 1008 Flower-basket abishekam on the last Friday of Aadi, the 108 Lamp Pooja on the last Friday of Thai and on the Chithira Pournami day, the 1008 Milk-pot abishekam are important features.

🛕 The Porridge distribution festival in the month of Aadi and the Pongal offering in the month of Thai are very famous festivals. On the ninth day of the Navarathri festival, Ambal in the guise of Mahishasuramardhini goes in procession along the streets. There is also a practice amidst the devotees who take vow to her of going around the sanctum wearing neem leaves attire. Every evening Ambal goes in procession in her golden chariot. The fee to participate in this is Rs.1000/-.

🛕 Those afflicted with chickenpox, by praying to her gets relief is the stern belief. The Theertham given in this temple is known as remedy for chicken pox. Devotees who confront impediments in getting married and those affected with eye diseases also pray to her. By lighting 23 lamps, people pray to her to attain rank in studies. When their prayers are fulfilled, the devotees perform Abhishekam to Ambal and do Angapradakshinam (body-rolling around the sanctum). Those who pray to her offer turmeric, sandal, saffron powder, Kappu and also Annabishekam.

🛕 Generally, only in the Siva temples, the Lord is worshipped performing Annabishekam. Since the Ambal here is an aspect of Parvati Devi, she is worshipped by performing Annabishekam. To prepare the Pongal offering to her, the temple uses only the dried cow dung. The residue ashes are distributed as prasadam. The main prasadam in this temple are the neem leaves, lime fruits, turmeric and holy water that are offered to Amman during prayers.

🛕 Mundakkanni Amman is said to be a form of Saraswathi who blesses people to excel in their fine arts. This place is also known to relieve naga Dosham of the worshipping devotees. Aadi Masam (Month) is considered to be the most auspicious month for worshiping the Amman. During this month, women from all corners of Chennai flock to this temple to cook and offer Sweet-Pongal to the Amman.

🛕 The deity being near and dear to the female devotees, Prarthana exclusive for them is offered in this temple. Therefore, all Tuesdays, Fridays and in the month of Aadi, this temple is seen as crowded with ladies clad in yellow. Special offerings to ward off ill spells, curses, Occults and other influences of bad spirits are exclusive for this temple.

🛕 The Temple is located at the heart of the Mylapore Area. This temple is in Mylapore to the north of Kapaleeshwarar Temple near Madhava Perumal temple beyond the Sanskrit college. Getting down at the Kapaleeshwarar Temple Stop or the Thiruvalluvar statue stop, we can reach the temple by walk. One can easily walk down to the temple either by taking the first left after Saravana Bhavan hotel on North Mada street adjoining the Kapaleeshwarar tank. If you get down at Luz corner, go to Kutchery road till you see an arch on the left side that leads to the temple. 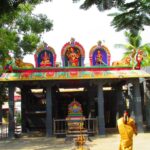