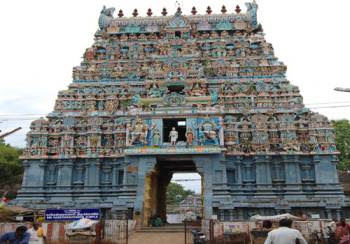 Nageswara Swamy Temple is a Hindu Temple dedicated to Lord Shiva located in Kumbakonam Town in Thanjavur District in Tamil Nadu. Presiding Deity is called as Nageswara Swamy / Naganathar / Madanthai Pahar / Vilva Nesar / Selva Piran / Paathala Beeja Nathar and Mother is called as Periyanayaki / Brahan Nayaki. The temple is one of 12 Shiva temples connected with the Mahamaham festival, which takes place in Kumbakonam every 12 years. This Temple is also known as Koothandavar Koval. The Temple is situated on the southern banks of river Cauvery.
This place has been referred in Thevaram written by Saint Tamil poet of 7th Century AD, Appar.As the temple is revered in Thevaram. it is classified as Paadal Petra Sthalam. one of the 276 temples that find mention in the Saiva canon. This Temple is the 114th Devaram Paadal Petra Shiva Sthalam and 27th sthalam on south of river Cauvery in Chozha Nadu. Lord Murugan of this Temple is praised by Saint Arunagirinathar in his revered Thirupugazh hymns. This temple is under the administrative control of the Hindu Religious and Charitable Endowments Department of Government of Tamil Nadu (HR & CE).

According to Hindu mythology, at the end of every Yuga, there is a huge flood called Maha Pralayam occurs and the whole world immerses in a deluge on account of the wrath of Hindu god Shiva for the sins committed by humans in earth. Lord Brahma prepared himself for the next cycle of creation. He put all the seeds from which creation would sprout in amrita (the elixir of immortality) along with four Vedas and Puranas and kept them together in a clay pot. On top of the pot, he placed a coconut with mango leaves and wrapping around the pot’s neck a sacred thread. He then placed the pot on the peak of Mount Meru in the Himalayas.
When the Maha Pralayam started, it destroyed all living creatures on the earth.The Amutha Kalasa also got displaced and started floating on the seas for years. Eventually when the Pralayam stopped, the Kalasa settled in Kumbakonam. Then Lord Shiva took the form of a hunter (Kirata Murthy) and split open the pot with his arrow. The life on earth started flourishing again. It is believed that when Lord Shiva opened the pot with his arrow, the pot broke and fell in various places across the earth. Each of these items became Shiva Lingas and temple has been established later.

As per Hindu mythology, Adiseshan (the king of serpents) holds the earth in its place. As the weight grew due to the sins committed by the wicked, he could not bear the excess weight and felt exhausted. He visited Mount Kailash and begged Lord Shiva to bless him with the adequate energy needed to do his job. Lord promised him the energy to hold the earth with a single head (Adisesha has 1000 heads).
Adisesha, with the blessings of Lord Shiva came to this part of Kumbakonam where one leaf of Vilwa fell from the nectar pot. He installed a Linga here and worshipped the Lord.As Nagaraja the king of snakes worshipped the Lord here, He is praised as Nageswarar.The water body in the temple is called as Naga Theertham.

Lord Surya is said to have worshipped here to regain his lost splendor. Hence, the temple tank came to be called as SuryaTheertham. Hence, this Temple is also considered as Bhaskara Kshetram.

The Sanctum Sanctorum consists of sanctum.Antarala and Artha Mandapam. Presiding Deity is called as Nageswara Swamy / Naganathar / Madanthai Pahar /Vilva Nesar / Selva Piran / Paathala Beeja Nathar and is facing east. He is housed in the sanctum in the form of Lingam. Lord is a Swayambhu Murthy. Bana is seated on a big Avudaiyar. Bana is smaller in size.The rays of the Sun falls directly in the base of the presiding deity in sanctum sanctorum for the first three days of Tamil month Chitirai (April – May).
The Vimana over the sanctum follows vesara style. The sanctum is of padabandha padmaka type stands on padmopana.The lotus leaves of the padmopana are carved with vitality.The epic scenes are in low relief on the plinth below the pilasters of the walls of the sanctum, recalling the wood work.Vinayaka, Dakshinamurthy,Arthanareeswarar. Brahma and Durga are the Koshta idols located around the sanctum walls. Chandikeswarar can be seen in his usual location.

Mother is called as Periyanayaki / Brahan Nayaki. She is housed in a separate south facing shrine. Mother Shrine is situated on the right side immediately after the Rajagopuram in the outer prakaram. Mother Shrine looks like a separate individual temple. The shrine consists of sanctum and Artha Mandapam.TheVimana over the shrine follows vesara style.

The complex of Nataraja shrine is in the form of a chariot on wheel drawn by hones as in the case of Airavatesvara Temple at Darasuram and Sarangapani Temple in Kumbakonam. Lord Nataraja here is also praised as Anantha Koothar. Nataraja Sabha is called as Perambalam.The chariot has stone wheels on both sides and is aesthetically designed with two stone hones and four stone elephants pulling it.
The 12 spokes on the wheels are said to represent the 12 zodiac signs.The other noteworthy feature is Mother Sivakami is playing the Tala to the dance of the Lord Nataraja and Lord Vishnu playing the flute feasting the eyes of the devotees. Nataraja Sabha is situated on the right side immediately after the Rajagopuram.

During Rajendra Chola’s Ganges expedition, the victorious Chola army brought a beautiful Vinayagar statue as a war trophy to the Chola Empire.TheVinayagar statue was kept at this temple and was aptly named as Gangai Vinayagar. Currently, the Vinayagar is present in the Ardha mandapam, in front of the sanctum of Nageswarar.TheVinayagar seems to be in the Pala style.

There is a separate shrine for Rahu, one of the nine celestial bodies in the Navagrahas, in the temple premises.

The Temple is noted for its Pralaya Kala Rudra Shrine which cannot be seen anywhere else.

Surya Theertham and Naga Theertham are Theerthams associated with this Temple. Singa Mukha Theertha (lion faced sacred spring) can be found at the right side immediately after the Rajagopuram.

Maasi Brahmotsavam in the Tamil month of Masi (Feb-Mar) is celebrated here in a grand manner. Lord comes to Mahamagam tank for Theerthavari. Purattasi Navaratri in August-September; Margazhi Thiruvadhirai in December-January and Panguni Peru Vizha in March-April are the other festivals celebrated here.

How to Reach Nageswaraswamy Temple?