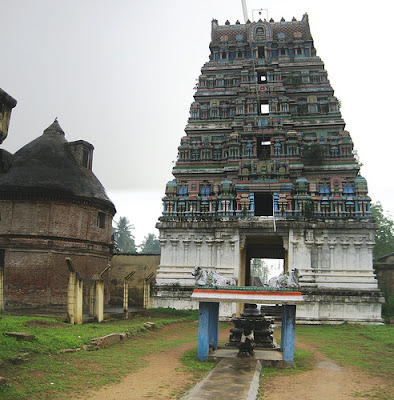 Palaivananathar Temple is a Hindu temple dedicated to Lord Shiva located in Papanasam, Tamilnadu, India. It is a Paadal Petra Sthalam and is considered to be the 19th in the series of Thevara Stalams in the Chola kingdom located south of the river Kaveri.
Palaivananathar Temple is an ancient Hindu temple depicting the rich architectural elements of yesteryears. Papanasam meaning destruction of sins is a panchayat town located in Thanjavur district. It is almost 25 kms away from Tanjore and 15 kms away from Kumbakonam. The village is the confluence point of three rivers, Kaveri, Tirumalairajan and Kudamurutti.
It is located 15kms West of Kumbakonam and one km East of Papanasam on the Southern Banks of Kudamurutti (a tributary of Cauvery) is the ancient Palaivana Nathar temple in Thiru Palaithurai whose legend extends across the four Yugams. The temple in its current form and structure dates back to the 12th century AD to the Chozha Period. Thirunavukarasar (Appar) has praised the Lord in 11 verses with each of the verse ending with ‘Palaith Thuraiyarey’.

Lord Sri Rama, who visited and performed Pooja at 108 Shivalaya temples, also visited Thirupalaithurai – Palaivananathar temple and worshiped the deity Lord Shiva and hence the name of the main deity at Palaivananathar temple is called “Rama Lingam”.
Lord Rama also placed his Bow and Arrow on the base of Vanni Tree on a Vijaya Dasami day and performed Shiva pooja and prayed for gaining victory. It was believed that worshipping the Lord Palaivananathar and the Vanni tree on the Tamil month of Puratasi relives one’s sin during this birth and the previous births.

To test the severity of the penance the rishis who were seeking Mukthi, Lord Shiva and Parvathi took the form of Bhikshandar and Mohini. Angered at finding them, the rishis created a Tiger from the Yagna and let go the fierce animal on them. It was here at Thiru Palathurai that Lord Shiva killed the Tiger and appeared before the rishis with the Tiger’s skin as his dress.

Seeking the title of Brahmma Rishi, Vashista installed a Shiva Lingam and undertook severe penance. Pleased with his prayers, Shiva appeared before him and anointed him. He also directed Sculptor Vishwakarma to install a beautiful smiling idol of Ambal south of this Sannidhi.

Another story goes that an arrogant Malaiathuvacha Pandya ignored the advice of kalava Rishi and was cursed to become a bear. The king’s wife invoked the blessings of Agastya Rishi who directed the bear to go the Chozha Kingdom and to the sacred Thiru Palaithurai. Once here, the bear was chased down by a hunter. A fear struck bear jumped into the Cauvery south of the temple. Instantly, he was liberated from his curse and he regained his original form. Delighted at this, Malaiathuvacha Pandya built the Mandapa and initiated the Kalyana Utsavam at this temple.

One of the 21 sacred ‘Thurai’ Sthalams

Thiru Pali Thurai is one of the 21 Sacred ‘Thurai’ Sthalams on the banks of Cauvery. Some of the others include ‘Maliyadu’ Thurai, ‘Maan’ Thurai, ‘Aavadu’ Thurai, ‘Poon’ Thurai, ‘Sen’ Thurai and ‘Then Kurankadu’ Thurai.

Named after a Tree

This is one of the 17sacred Devaram praised temples named after a tree. Some of the others include Thillai Vanam, Thiru Nellikka, Thiru Pananthaal, Vilva Vanam, Thiru Erukaththam Puliyur and Thiru Idai Maruthur.

Palaivananathar Temple, built during the reign of the Chola Kingdom, is spread over an area of 3 acres of land. The temple has 2 prakarams i.e. outer courtyard and its entrance door is coroneted by a five tiered Rajagopuram. Several ancient inscriptions of the Chola Dynasty and Vijayanagar Empire have been engraved on the walls of the temple. Lord Shiva, the central deity of the temple is known as Palaivananathar by the devotees.
The temple also houses the idol of Goddess Thavalavennagaiammai. Generous contributions have been made during the period of Kulothunga Chola I and Kulothunga Chola III of the Chola Dynasty for the development and maintenance of the temple.
The 5 Tier Rajagopuram at the Eastern Entrance that has beautiful sculptures recording mythological stories. The original construction of the temple complex was of brick with Chozhas improving upon it and making it stronger with Granite Construction in the 12th Century AD. Inside the temple in the inner prakara on the upper wall on the western side, one finds beautiful paintings and several different sculptures depicting ancient stories.
Presently, the temple is preserved and maintained by the State Archaeological Department. There are two sacred tanks inside the temple one relating to Indra and the other dating back to the period of Vashista Rishi. Saneeswaran is seen facing Mahalakshmi at this temple. Lord Subramanya has taken the form of the 6 faced Shanmugha at this temple.

This is one of the 8 temples in Chozha Kingdom where Lord Shiva and Ambal are seen in a Kalyana Kolam. The others are Thiru Vidaimaruthur, Thiru Kanjanur, Thiru Maan Thurai, Thiru Ambarmaakaalam, Thiru Chottruthurai, Thiru Valanchuzhi and Thirukkara Veeram.

There is also a world famous granary (Store House of paddy) Breadth: 86 feet (26 m), Height: 36 feet (11 m) capacity of 3,000 Kalam (measure) constructed by Nayaks in 1600 – 1634. State Archaeological Department declared it as a monument. Mention must be made of those from the period of Kulothunga Chola I and Kulothunga Chola III speaking of gifts made to the temple during the Chola period.
This 400 year old Granary on the Northern side of the Raja Gopuram is located at the Eastern entrance. This was built by Raghunatha Nayak of Thanjavur. This is circular at the bottom and conical at the top with three different entrances – one on the Western side at the bottom and one each in the middle and the top on the Southern side. The granary has the capacity to hold 3000 kalams of grains.

There are 11 inscriptions dating back to the Chozha Period in the 12th Century AD that provide insights into the gifting of tax free land, donations towards conduct of Aadi Pooram festival. Inscriptions relate to the rule of Kulothunga Chozhan I and III, Vikrama Chozhan and Raja Raja Chozhan II and III.
During the rule of Kulothunga I, taxes to be paid by this village to bigger town of Nallur was waived. Later period inscriptions relate to Pandya and Vijayanagar rulers. The pillars in the Maha Mandapa was renovated and improved upon during the Vijayanagara period.