🛕 Pattabhiramar Temple is a Hindu Temple dedicated to Lord Vishnu located at Vilacheri near Thiruparankundram in Madurai District of Tamilnadu. The place is also noted for scholars in Vedas and Tamil. Eminent Tamil scholar Parithimarkalaignar (Suryanarayana Sastry) was born here and was the first to Tamilize Sanskrit names. Surya-Parithi, Narayana-Mal, Sastry-Kalaignar. Vilacheri is triangular in shape. Nearly 60 eminent Vedic scholars (Ganapadigal) lived here.

🛕 Rescuing Sita from her captivity by killing Ravana in the war, Sri Rama returned to Ayodhya through Danushkodi. His coronation was celebrated in Ayodhya which everyone could not have witnessed then. That is the darshan, one can have in Vilacheri. Sri Rama graces with Mother Sita on his right and Lakshmana on the left. Sri Garuda and Sri Anjaneya grace as Dwarapalakas. This is how Sri Rama graced at the time of his coronation in Ayodhya.

🛕 The horoscope of Sri Rama is a rare one with five major planets in exaltation. Keeping Rama’s picture and horoscope in our houses is by itself a boon that brings all happiness. Sri Rama was an Ekapathni (single wife) hero. Sri Hanuman is noted for his celibacy of highest standard who regarded all women as his mother as Sita. Worshipping the two in a single shrine cleanses one’s mind occupied with unjust passions.

🛕 As the holy Ganga flows from North to South representing its greatness, River Vaigai too flows southward. A dip in Vaigai and worship of Pattabhirama is an opportunity a devotee cannot afford to miss.

🛕 For the Vila puja in Madurai Meenakshi Temple, paddy is taken from Vilacheri a place noted for Vila fruit trees. Hence the name Vilacheri.

🛕 Festivals are celebrated in this temple for each deity in various seasons without community discriminations. The practice continues even today.

🛕 Worshipping Lord Rama in sitting form in the temple would bring name and fame to the devotee. Women become Mother Sita herself who was an embodiment of patience and endurance. Devotees offer Tirumanjanam and Vastras to Lord Rama. 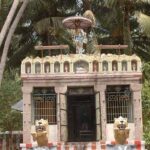