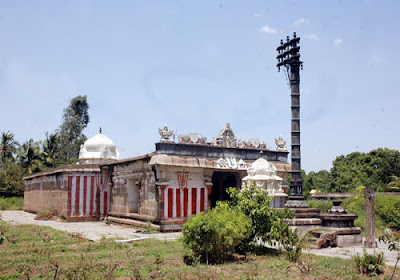 Rajagopalaswamy Temple is dedicated to Hindu God Vishnu located at Manimangalam Village in Kanchipuram District of Tamilnadu. This 1000year old Rajagopalaswamy temple in Manimangalam housed on a I 1/2 acre area, about 12kms West of Tambaram, a temple whose construction dates back to the Chola period and one that is abound with rich stone inscriptions providing us with insights into the glory of this temple. Chola Rulers including Kulothunga I, Vikrama Chola Deva and Raja Raja contributed immensely to the upkeep of the temple but the temple now craves for attention.
This temple is a Parikara Sthalam for getting back one’s eye sight. Manimangalam is the birthplace of Sri Ramanuja.The presiding deity at this ancient temple is Sri Rajagopalar, who is seen in a standing posture facing east, with his consorts Sridevi and Bhoodevi.There is a separate shrine for Sengamalavalli Thayar. A peculiarity of the deity here is that he holds the conch in his right hand and the Sudarsana Chakram in his left hand.The temple is located near the Manimangalam bus stop.

The earliest references to Manimangalam are in relation to a battle fought between the Western Chalukya ruler Pulikesin II and the Pallava King Narasimhavarman (.This fact is mentioned in the copper plates discovered at Kooram. Kalki has written about the Manimangalam battle in Sivagamiyin Sabatham. He describes how Mahendra Varma Pallava was injured in the battle at Manimangalam, and how his son NarasimhaVarma Pallava and his trusted lieutenant Paranjothi vanquished Pulikesin’s army.
The Rajagopala Perumal is one of three Vishnu temples in the town and was constructed by the Medieval Cholas.The earliest inscriptions mentioning the temple are by Rajendra Chola I and have been dated to 1056 CE. Rajendra Chola I refer to the temple as Kamakoti-Vinnagar and Thiruvaykulam.
The Temple The presiding deity at this ancient temple is Sri Rajagopalar, who is seen in a standing posture facing east, with his consorts Sridevi and Bhoodevi. There is a separate shrine for Sengamalavalli Thayar. A peculiarity of the deity here is that he holds the conch in his right hand and the Sudarsana Chakram in his left hand. His lower right hand is in the Abhaya Hasta mudra and he holds the mace in his lower left hand. This is also a temple that Ramanuja is believed to have visited. Inscriptions of 1 Ith century and 12th century CE are found in the temple.
All the three Vimanas of the temple are extremely attractive.The temple covers an area of around 1.25 acres and looks very big with a lot of open space around the sanctum. The east facing sanctum enshrines more than 7 feet tall gigantic idol of Raja Gopala Swami. His idol is very beautiful.The Utsava idols of Raja Gopala Swami with his two consorts, ChenkamalaValli and Andal are all found together in the sanctum.The inner prakara is something very interesting and no one should miss this.
Generally, the exterior walls of Vishnu temple do not have niche (called as Koshta in Sanskrit) idols similar to the temples of Lord Shiva. Hardly one or two niche idols are found in few Vishnu temples. However, in this temple, there are five Koshta idols found on the exterior walls of the sanctum. Ganesha, Chakra Prayoga Murti, another Chakra Prayoga Murti, Paramapada Nathar and Durga are found as the niche idols. Interestingly, it is unique to find Ganesh and Durga as the Koshta idols in a Vishnu temple.
The miniature carvings of Dakshinamurti, Nardana Krishna,Yoga Narasimha, Kalinga Nardana Krishna and aVishnu seated in Padmasana posture are found above all these niche images. Interestingly, even the miniature relief image of Vishnu also holds conch in his right arm similar to the presiding deity. Dakshinamurti is not found inside any other Vishnu temple but only on Vimanas. It is another unique feature of the temple.A sculpture of Hanuman is also found inside the inner prakara.
The maha mandapam area has beautiful pillars in round shapes. The walls have inscriptions. In Ardha mandapam, there are Utsava idols of few Alwars,Vishwaksenar and Ramanuja are found.The entire main shrine is situated on an elevated platform. In the outer prakara. there is a vast open space area. The shrine of the Goddess Chenkamala Valli and the shrine of Andal are found in the outer prakara. Both ChenkamalaValli and Andal are very beautiful idols.
The entrances of both the shrines have the mural paintings. Similarly. the Dvarapalas are found in the form of mural paintings at the entrance of the main shrine. The Vimana of Raja Gopala Swami is artistically beautiful. Similarly. the vimanas of both the shrines of the Goddesses are also very attractive. Garudan sub shrine, Bali peetham, flag staff and the deepa sthambham are all located facing towards the main shrine. There is an interesting window gilded with the sculpture depicting the fight between Vali and Sugriva.
A very big bell is also found in this temple.The entire temple is surrounded by huge fort like compound walls.The entrance of the temple has two sculptures of serpents. Outside the temple, there is a four pillared mandapam and further exterior to that, there is a sub shrine for Hanuman who faces towards the entrance of the temple.The temple is located in a typical village atmosphere and is surrounded by trees and old type tile roof houses with thinnais.
The processional deity (Utsava murti) of four-armed Vishnu is in the usual pose of having the chakra in his right hand and sankha in his left, flanked by his two consorts.The alcove on the outer walls of this sanctum contains beautiful images of various forms of Vishnu. Interestingly, in most of these sculptures. Vishnu holds the chakra in the Prayoga position as though he is just about to release it. In another separate niche by the side of the sanctum is an image of Vire Anjaneya holding his right hand upraised and his left hand was holding a lotus.
There are no vahanams in the temple except for the Garuda vahanam. The vacant land inside the temple on either side of the main Sannidhi has been let out on lease and lessee had planted aubergine saplings in neat rows.The utsavamurtis of the Vaikuntanatha temple are kept in the Rajagopala temple for safety reasons.The architectural craftsmanship of the ancient artists is revealed from the wonderful carvings and artistic trappings that adorn the temple and the images in temple.
In front of the main sanctum there is erected a mandapa with pillars of the Chola age which indicates that this mandapa as also many of the other structures in this temple-complex were constructed in the reign of the Imperial Chola kings of Thanjavur (9th-13th centuries A.D.). who ruled over this area and gave numerous grants for the maintenance of this temple.

The temple is abound with inscriptions in Tamil and Sanskrit earliest of which dates back to the Ilth Century AD and continued to find updates of contribution to the temple with the passing of each century. On the South wall of the central shrine of this temple is an inscription in Sanskrit that records a grant made to Lord Rajagopalaswamy.A Tamil inscription on the same wall records a sale of 4000 Kuli of land. Another inscription dating back to Chola Raja Raja I records a gift made by members of the Mahasabha to this temple.
On the North and West walls of the temple. inscriptions indicate gifts provided for the offerings and expenses of worship of the temple by making 3200kuli of land.An 11 I8AD inscription records a grand of 4450kuli of land. A few more inscriptions dating to 12th Century AD and to the period of Kulothunga I registers gift of land to the temple as well as the grant of land for providing offerings to the temple.
Two inscriptions on the west wall of the temple relating to Vikrama Chola Deva, in his 13th year of reign, and again to the 12th Century AD, provide us insights into the purchases of land for the offerings at the temple. A I I 54AD inscription in Tamil on the outside of the East wall of the inner prakara records a donation of tax free lands to the temple for sacred offerings. Inscriptions on the North and EastWalls dating to 1198AD record gifts of four lamps for the temple.
Inscriptions dating to 13th Century AD and to the rule of Raja Raja II/III record resolutions relating to gifts for the deity.Another interesting inscription of 1229AD and to the rule of Raja Raja III talks about payments into the treasury for maintaining the Sannidhi lamps. On the South wall in Tamil is an inscription dating to the rule of jatavarman Sundara Pandya that records the sale by a devotee of a Pattam to be worn by the deity. Inscriptions also indicate gifts of several lamps by devotees and also gift of gold to support the continuous burning of the lamps.

Connectivity Rajagopala Perumal Temple is a Hindu temple located at Manimangalam, near Tambaram, a suburb of Chennai. The temple is about 12 kms from Tambaram on the Mudichur road and 5 kms from Vandalur on the Sriperumpudur highway. One can take the Tambaram – Sriperumpudur bus (route numbers: 55N, 80, 583C, 583D) to reach the temple.