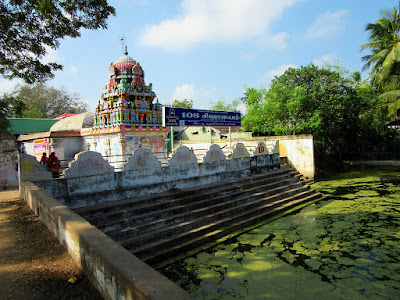 Ramalingaswamy Temple is a Hindu temple located at Papanasam in the Thanjavur district of Tamil Nadu, India. The temple is dedicated to Shiva.

According to Hindu mythology, Lord Rama, after rescuing Sita, performed Shiva Puja in Rameswaram to cleanse himself of sins that befell on him in the war killings. While returning to Ayodhya from there, Lord Rama felt that the sins of killing Kara and Dooshna in Janasthanam were following him. He decided to perform Shiva Puja immediately. The Lord installed 107 Shivalingas and asked Sri Anjaneya to bring one from Kasi thus making the total 108. The main Linga was named Ramalingaswamy and the one brought by Sri Anjaneya was named Hanumantha Linga. A shrine was built for Mother Parvadhavardhini later.

It is believed that the devotees get response to their prayers offered in temples facing west as they have more gracing powers. Sri Ramalingeswarar temple not only faces west but all the 108 Shiva Lingas are also facing west and therefore, it is natural that the power of the temple is very supreme to benefit the devotees. The devotee also has the additional advantage of worshipping 108 Shiva temples simultaneously from this temple itself.
Lord Ramalingaswamy is in the main shrine. On a hall (Mandapam) there are 106 Shiva Lingas in 3 rows. Hanumantha Linga shrine is outside the temple. Barring the Linga in the sanctum sanctorum, devotees are allowed to offer flowers and prayers directly themselves. Special pujas are performed to 107 Lingas on the Pradosham days – 13th day from new moon or full moon days.
The other significance of the temple is that Kamadenu the divine cow has an equal place with Nandhi the bull vehicle of Lord Shiva before his shrine. Lord Rama worshipped Kamadenu as advised by Maharshi Agasthya and it is also said that the Rishi himself worshipped the divine cow and continues the worship even now on Pradosham days. The idol of Kamadenu is so beautiful with ornaments around its neck.
The Vimana (tower above the shrine) of the Ramalingaswamy is based on the Rameswaram design and that of Hanumantha Linga shrine has the Kasi Viswanatha temple pattern. Those unable to visit these places can have the benefits from this temple itself.

Shivrathri is very devotionally celebrated in the temple. Four time puja is performed for 107 Lingas during the night chanting Rudra Mantras. Rudrabishekam is performed to Lord Ramalingaswamy. Devotees use to circumambulate around the prakara 108 times. This puja is followed on the Aipasi Annabishekam day too.
The place is called Papanasam as it destroyed the Papas (sins, Nasam-destroying) Lord Rama, Sri Anjaneya and Sri Sugriva incurred during the Lanka war by killing Ravana and others. The place has also the reputation of being praised as East Rameswaram – Keezh Rameswaram. People perform abishek with milk and honey at Surya Theertham for relief from doshas incurred due to failure in performing proper ceremonies for the ancestors.
Lord Nataraja is taken in procession in Margazhi Tiruvadhirai day. As the temple is closely related with Ramayana story, there are sculptures of Lord Rama, Sri Lakshmana, Mother Sita, Sri Anjaneya and Sri Sugriva worshipping Lord Shiva. There are shrines for Lord Muruga with His consorts Valli and Deivanai, Kasi Visalakshi and Annapoorani in a single shrine and Khala Bhairava, Sani Bhagwan and Sun God adjacent to one another.
Shivrathri in February-March, Navarathri in September-October, Aipasi Annabishekam in October-November and Margazhi Tiruvadhirai in December-January are the festivals celebrated very devotionally in the temple.

Devotees seek the pardon of Lord Shiva for sins committed unknowingly and for their failure in their duties to their ancestors. Realizing their wishes, devotees perform abishek to Lord with milk and honey.

How to Reach Ramalingaswamy Temple Papanasam?

Papanasam is 25 km from Thanjavur on the Kumbakonam Road. The place is 15 km from Kumbakonam. The temple is very near the bus stand. Nearest Railway Station is located at Papanasam & Nearest Airport is located at Trichy.