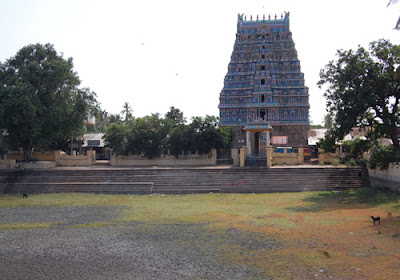 This Temple is facing towards east with seven tiered Rajagopuram. The Rajagopuram is about 90 feet tall. The Temple is about 380 ft (115 m) long and 234 ft (72 m) wide. The temple has two prakarams and enclosed within compound walls. There is a three tiered Rajagopuram at the entrance of the inner prakaram. Dhwaja Sthambam and Balipeedam can be seen immediately after this Rajagopuram.
The Sanctum Sanctorum consists of Sanctum, Ardha Mandapam, Maha Mandapam and Mukha Mandapam. Garudazhwar can be seen facing the sanctum. Presiding Deity is called as Saranatha Perumal and is facing east. He is housed in the sanctum. His idol is about 12 feet tall and is in standing posture. The stone image of River goddess Cauvery can be seen on the left side and the stone image of Sage Markandeya can be seen on the right side of the presiding deity.
River Goddess Cauvery is found to be in a maternal posture with a child in her lap. The festival deity is accompanied by Bhudevi, Sridevi and Neeladevi. A small idol of Santhana Krishna and Selvar are also housed in the sanctum. The vimana over the sanctum is called as Sara Vimanam. Mother is called as Sara Nayagi / Pancha Lakshmi / Sara Nachiyar. She is housed in a separate east facing shrine. Her shrine is situated adjacent to the sanctum in Maha Mandapam.
The image of both the main idol and the festival image in the Thayar are depicted in seated posture. This temple is considered as only Divya Desam where Lord Vishnu is seen with his five consorts namely Sridevi, Bhoodevi, Neeladevi, Mahalakshmi and Sara Nayagi. There is marriage hall (Kalyana Mandapam) in the inner prakaram. There is a shrine for Rajagopala Swamy in this Mandapam. He is gracing the devotees along with his consorts Rukmini and Sathyabama.
Shrine of Srinivasa Perumal (Thiruvenkadamudaiyan) can be seen in front of Rajagopala Swamy Shrine. There is a separate shrine for Lord Rama in the temple premises. Lord Rama can be seen along with his wife Sita and his brother Lakshmana as he was found in forest for 14 years. There are separate shrines of Yoga Narasimha, Kaliyamardhana, Bala Saranatha, Andal, Senai Mudaliar, Ramanuja, Pillai Lokacharyar, Nammazhvar, Azhwars and Manavala Mamunigal in the temple premises.
The temple tank, Sara Pushkarini, is situated in front of the temple. The size of the tank matches with the dimension of the temple. There are shrines for Sage Agasthya, Lord Brahma and Mother Cauvery on the western bank of Sara Pushkarini. The temple is one of the few places where there is a separate shrine for river Cauvery. There is a shrine of Hanuman from the west end and Vinayaka from the North eastern side of the temple tank.

The temple priests perform the pooja (rituals) during festivals and on a daily basis based on Vaikasana Agama. As at other Vishnu temples of Tamil Nadu, the priests belong to the Vaishnavite community, a Brahmin sub-caste. The temple rituals are performed six times a day: Ushathkalam at 7 a.m., Kalasanthi at 8:00 a.m., Uchikalam at 12:00 p.m., Sayarakshai at 6:00 p.m., Irandamkalam at 7:00 p.m. and Ardha Jamam at 10:00 p.m.
Each ritual has three steps: alangaram (decoration), neivethanam (food offering) and deepa aradanai (waving of lamps) for both Saranatha Perumal and Sara Nayagi. During the last step of worship, Nadaswaram (pipe instrument) and tavil (percussion instrument) are played, religious instructions in the Vedas (sacred text) are recited by priests, and worshippers prostrate themselves in front of the temple mast.

The major festival, the twelve days Brahmotsavam is celebrated during the Tamil month of Thai (January – February). Radhotsavam, the temple car is drawn during the ninth day of the festival. Lord Saranatha Perumal is taken in procession in a chariot with Sridevi, Bhudevi, Neela Devi, Mahalakshmi and Sara Nayaki. He blesses us as a child in his mother Cauvery’s hand in a beautifully decorated chariot. It is believed that the legend occurred when the planet Jupiter was positioned in the Pushya asterism.
Once, in 12 years when Jupiter transits through the zodiac sign of cancer in the Pushya asterism, the chariot festival on Thaipoosam is considered to be of great significance and is said to be on par with the Mahamagam festival in Kumbakonam. Krishna Janmashtami, Karthigai, Tamil New Year, 10 days Margazhi festival, Sankranti, Panguni Uthiram, Vasantha Utsavam, Jyeshta Abhishekam, Navaratri, Manavala Mamunigal Utsavam, Pavithra Utsavam, Ramanuja Festival and Rohini Utsavam are the other festivals celebrated here.

The temple is revered in Nalayira Divya Prabandham, the 7th – 9th century Vaishnava canon, by Thirumangai Azhwar in thirteen hymns. The temple is classified as a Divyadesam, one of the 108 Vishnu temples that are mentioned in the book. He has mentioned about the devotees of Saranatha who are deeply immersed in Narayana consciousness.

Divya Kavi Pillai Perumal Iyengar in his Ashta Prabandha states that people should not waste their time glorifying wealthy men but should laud the greatness of the almighty.

This temple is considered as the only Divya Desam where Vishnu is seen with his five consorts namely Sara Nayagi, Sridevi, Bhudevi, Maha Lakshmi, and Neela Devi.

As per Hindu legend, when time came to destroy the world and finish the Yuga, Brahma was worried a lot. He pleaded Vishnu to tell him a way to keep the tools necessary for Srishti and all Vedas safely. Lord Vishnu ordered him to put all these things in a strong mud pot. Lord Brahma tried to make the mud pot from the sand from various places and got failed. Lord Brahma went to Lord Vishnu for guidance.
Lord Vishnu instructed Lord Brahma to proceed to Thirucherai and make the pot out of the clay on the banks of River Cauvery. As instructed, Lord Brahma came here and finally made a pot out of the sand taken from Thirucherai and saved all Vedas and all necessary aids for creation. As the place has Saram (high qualities), this place came to be called as Sara Kshetram. Thus, this place plays a lead role in safeguarding all living things even after the Maha pralaya.

Once Ganga, Cauvery and other major rivers in the form of young maiden, were playing at the foot of the Vindhya Hills. A Gandharva, a celestial being, who was passing by, waited for a minute and saluted them. The Rivers were curious to know whom the salute was addressed. Hence, the approached the Gandharva and enquired him. Gandharva said that the salute was offered to the superior one among them.
A dispute arose among them to know the superior. All the rivers approached the Hindu god of creation, Brahma. He said that during the Vamana avatar, Lord Vishnu appeared as dwarf and later became Trivikrama to the king Mahabali. He placed his third feet on the demon king and cleansed Ganga by placing his foot on it. Based on the narration, Brahma quoted that Ganga was the holiest of all rivers.
River Cauvery wanted her status to be equal to river Ganges and sought the advice of Lord Brahma. Lord Brahma asked her to undertake penance at Thirucherai on Lord Vishnu, as he was the only one who could provide her with a solution. River Cauvery performed an intense penance. She laid three wishes before Lord Vishnu as follows; Lord Vishnu should stay in this place for ever, all the living beings in this place should attain his lotus feet and she should be treated on par with River Ganga.
To test her devotion, Lord Vishnu appeared in the form of a child in front of her. Realising the anonymity, Cauvery treated the child with care and motherly devotion. Lord Vishnu was pleased with her devotion and revealed all his ten avatars to her and asked her to have a holy dip in the Sara Pushkarini. He also granted her the boon during the Tula month (October – November) that she would be considered superior to Ganges.

As per a local legend, Azhagiya Manavala Nayakkar, the king of Thanjavur, wanted to build a temple for Rajagopala Swamy in Mannargudi. He made Narasa Boopalan, his minister, as in charge for arranging materials and constructional activities of the temple. Narasa Boopalan was an ardent devotee of Saranatha Perumal of Thirucherai. He wanted to renovate the Saranatha Perumal Temple. So, he ordered his men to unload one stone from each cart which passed Thirucherai.
The king came to know of this and wanted to punish the minister. But before that, in overnight, Narasa Boopalan constructed this temple and to please the king, added a shrine for Rajagopala Swamy in this temple. The minister is believed to have prayed to Thirucherai deity to save him from the punishment. The king who came to the temple witnessed the form of Mannargudi temple in this temple. The king was pacified and ordered to complete the temple with his money.

When the sage came to know that Lord Vishnu loved his daughter, he told the Lord that she was a little girl and did not know even how much salt to be added to food. Lord Vishnu said that she can cook without salt also and he would accept it happily. Then, he married Mother Bhoodevi at this place. Hence, Lord Vishnu came to be called as Uppiliappan (Lord accepting food without salt). This legend is similar to the Thirunageswaram UppiliappanTemple. Further, it is said that Sage Markandeya attained salvation here.

Chola King named Satya Keerthi is believed to have worshiped Lord Vishnu of this temple for child birth and was blessed with a son.

It is said that Lord Vishnu, himself desired to watch the Brahmotsavam at Thirucherai. The festivals of the temple are thus considered sacred.

This shrine is the 15th among the 108 Dhivya Desam. Sri Saranatha Perumal Temple is about 24 km from Kumbakonam on the way to Thiruvarur and 10 km from Nachchiar Koil. Frequent buses are available from Kumbakonam and Thiruvarur. The temple is in between the banks of river Mudikondan and Kudamurittiyaru.