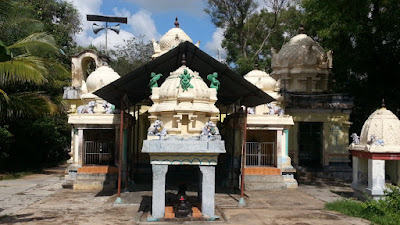 Sarguna Lingeswarar Temple is a Hindu Temple dedicated to Lord Shiva located in Marudhanallur, a village in the outskirts of Kumbakonam, in Thanjavur District in Tamil Nadu. Presiding Deity is called as Sarguna Lingeswarar / Karukudi Nathar / Brahmapureeswarar and Mother is called as Advaita Nayaki / Kalyani Nayagi / Sarvalankara Nayaki. The Temple is also considered as Parihara sthalam for Vasthu related issues.

This Temple is considered as one of 276 Paadal Petra Sthalams glorified in the early medieval Thevaram poems by Tamil Saivite Nayanar Thirugnana Sambandar. This temple is considered as the 186th Devaram Paadal Petra Shiva Sthalam and 69th sthalam on the southern side of river Cauvery in Chozha Nadu. The temple is maintained and administered by the Hindu Religious and Charitable Endowments Department of the Government of Tamil Nadu.

During his exile, Lord Rama stayed here for some time before proceeding to Srilanka. He decided to perform Shiva Pooja and requested Lord Hanuman to bring a Shiva Lingam from Kasi. As there was delay in getting a Linga from Hanuman, to keep the puja time, it is said that Sri Rama made a Linga with sand, the Prithvi Linga and completed his Pooja. The hand impression of Lord Rama can be still seen on this lingam. The base of the lingam is made of stone. No abhishekam is performed to this lingam directly and it is always covered with a metal sheet (Kuvalai). After Rama completed his prayers, Lord Hanuman bought Lingam from Kasi. The Linga brought by Hanuman is installed in the prakaram and came to be called as Hanumantha Linga.

Lord Brahma had worshipped Lord Shiva in this temple. Hence, Lord Shiva came to be called as Brahmapureeswarar.

As per legend, a trader Danajaya by name incurred leprosy as he had an intercourse with his step mother unknowingly and was afflicted by leprosy due to his illicit relationship. He visited this temple and prayed to Lord Shiva for relief. Lord Shiva cured his leprosy and blessed him. Hence, the people suffering from leprosy visit this temple frequently for cure.

Marudhanallur was called as Karukkudi and Marudhanthanallur in ancient times. There are few illegible inscriptions found in the temple premises. The inscription slabs had been misplaced in renovation and renders no proper information. Chola King Kulothunga Chola III had been mentioned in one of the inscriptions. The neighboring village of Enanallur is the birthplace of Enadi Nayanar, one of the 63 Nayanmars. This temple is under the control of the Hindu Religious and Charitable Endowments Department of Government of Tamil Nadu (HR&CE). The last consecration ceremony took place on 11.06.2011.

This Temple is facing towards east with an entrance arch. The entrance arch has stucco image of Ardhanareeswarar flanked by Nandis and Bhooda Ganas. The Temple has single prakaram. Nandi and Balipeedam can be found facing the sanctum immediately after the entrance. There is no flag staff or Dwajastambam in the temple. The Sanctum Sanctorum consists of Sanctum, Ardha Mandapam and Maha Mandapam.
Presiding Deity is called as Sarguna Lingeswarar / Karukudi Nathar / Brahmapureeswarar and is facing east. He is housed in the sanctum in the form of Lingam. Lord is a Swayambhu Moorthy. The Linga is very small in size. There are signs on the Linga showing that it was made of sand. The Avudayar Peeta is of stone. Abhishekam is not performed to Lingam as it is made of sand.
Abhishekam is performed only after covering the Lingam with a Kavasam. Shrines of Dwara Vinayakar and Bala Murugan can be found at the entrance of the Mahamandapam. Dwarapalakas can be found at the entrance of the sanctum. Narthana Vinayagar, Veenadhara Dakshinamoorthy, Brahma, Lingothbhava and Durga are the Koshta idols located around the sanctum walls.
Veenadhara Dakshinamurthy is found accompanied by two Sanakathi sages instead of four sages. Narthana Vinayaga was flanked by Bhooda Ganas. Lingothbhavar is situated in the Koshta wall behind the sanctum. Lord Vishnu and Brahma can be found in worshipping posture on either side of Lingothbhavar. Thus, devotees can enjoy the darshan of Hindu Trinity. Chandikeswarar can be found in his usual location.
Mother is called as Advaita Nayaki / Kalyani Nayagi / Sarvalankara Nayaki. She is housed in a separate east facing shrine. It is noteworthy that Lord and Mother are facing east direction and Mother shrine is situated on the right side of the sanctum. This symbolizes their wedding posture. The statue of a trader Danajaya in worshipping form can be found before the Mother shrine.
The idol of Chola King Kulothungan-III can be seen in front of Mother shrine. There is also an idol of Pandiya king Sargunan and his minister. There is a shrine for Hanumantha Lingam in the Temple premises. Nandi can be found facing the shrine. There is a shrine for Lord Murugan with his consorts Valli and Deivanai in the Temple premises. Lord Murugan’s vehicle (peacock) is looking towards the earth. Devotees worship here to seek help for Vasthu related Doshas.
There are shrines for Sakthi Vinayagar, Thirugnana Sambandar, Thirunavukkarasar, Sundarar, Manickavasagar, Gaja Lakshmi, Suryan, Chandran, Bala Subramanya, Navagrahas, Bala Saneeswarar, a Shiva Linga with Mother and Bhairavar in the Temple premises. Theertham associated with this Temple is Kari Theertham / Yama Theertham. Sthala Vriksham is Vilva tree.

Those suffering from leprosy pray to Lord Shiva here. It is the staunch faith of the patients that their prayer will certainly be responded by the Lord. Devotees also prayer here for absolving their sins and to get rid of marriage obstacles. The Temple is also considered as Parihara sthalam for Vasthu related issues. Devotees perform abishek to Lord and Mother, offer vastras and feed the poor.