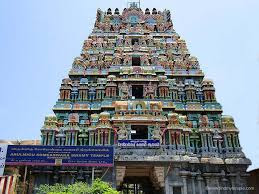 Someswara Swamy Temple is a Hindu Temple dedicated to Lord Shiva located in Kumbakonam Town in Thanjavur District in Tamil Nadu. Presiding Deity is called as Someswara Swamy / Someswarar / Kayarohana Swamy / Vyazha Somesar / Sikkesar / Somanathar and Mother is called as Thenar Mozhiyammai / Somasundari. The temple is one of 12 Shiva temples connected with the Mahamaham festival, which takes place in Kumbakonam every 12 years. This Temple is situated in the southern portion of Sarangapani Temple.
The presiding deity is revered in the 7th century Tamil Saiva canonical work, the Thevaram. written by Tamil saint poets known as the Nayanmars and classified as Paadal Petra Sthalam. This Temple is the 145th Devaram Paadal Petra Shiva Sthalam and 28th sthalam on south of river Cauvery in Chozha Nadu. Lord Murugan of this Temple is praised by Saint Arunagirinathar in his revered Thirupugazh hymns. This temple is also known as Kudanthai Karonam and located near Potramarai Kulam.

It is believed that Chola King Parantaka installed a Shiva Linga in this Temple and worshipped the Linga for Child Boon.The Linga installed by him came to be called as Chozheeswarar.

It is claimed by few people that Kudanthai Karonam mentioned in Devaram hymns refer to Kasi Viswanathar Temple. However, the seventh song mentions about Thenarmozhiyal, consort of Someswar of Someswaran Temple. Hence. Someswaran Temple can be considered as actual Paadal Petra Sthalam. The Temple was constructed by the Cholas.The Temple was extensively renovated byVijayanagara Kings and the Nayak Kings.The temple is maintained and administered by the Hindu Religious and Charitable Endowments Department of the Government of Tamil Nadu.
The Temple is facing towards east with 5 tier Rajagopuram. It has single prakaram. There are three entrances to the temple. Someswaran Temple is situated in the southern portion of Sarangapani Temple. The temple shared a larger space during initial construction, but later Sarangapani Temple adjacent to it occupied more space. Dwajastambam. Balipeedam and Nandi can be found facing the sanctum in the prakaram.
The sanctum sanctorum consists of sanctum, antarala and Arthamandapam. Presiding Deity is called as Someswara Swamy / Someswarar / Kayarohana Swamy /Vyazha Somesar / Sikkesar / Somanathar and is facing east. He is housed in the sanctum in the form of Lingam. The Bana (prominent cylindrical structure of Linga) is of special type known as Narmada Bana. Lord is a Swayambhu Murthy.
Vinayaka, Dakshinamurthy. Arthanareeswarar. Brahma and Durga are the Koshta idols located around the sanctum walls. Chandikeswarar can be seen in his usual location. The Vimana over the sanctum follows vesara style. There are 8 sculptures on the sanctum wall in worshipping posture. Procession Idols of Nataraja with his consort Shivakami and Somaskandar are placed in the hall in front of the sanctum.
Mother is called as Thenar Mozhiyammai / Somasundari. She is housed in a separate shrine.The Vimana over her shrine follows vesara style. There is a separate shrine for Saint Thirugnanasambanthar near Mother Shrine.Thirupathigam (hymns of Nalvar) in the form of epigraph is found in this temple. Lord Somaskandar can be seen in the inner mandapam.
There is a shrine for Lord Nataraja with his consort Mother Sivakami in the temple premises. He is named Kana Nattam Udayar meaning that the Lord would have no loss if devotees overlook praying to him, but it would be a loss only to such indifferent ones. Praying in this shrine brings the devotee progress in his trade and promotions in job.
There is a shrine for Lord Murugan in the Temple premises. He is gracing the devotees along with his consorts Valli and Deivanai.The idol of Lord Murugan is unique here. He can be seen with six faces and twelve hands, seated on his peacock mount and wearing footwear (Padarakshai). Lord Murugan of this Temple is praised by Saint Arunagirinathar in his revered Thirupugazh hymns. There is a unique custom of placing the Shadari (crown) on the head of the devotees similar to the practice in Vaishnava temples.
There is a shrine for Lord Maleesar and Mangala Nayaki immediately after Rajagopuram entrance. As Vishnu (Mal) worshipped Lord Shiva here. Lord Shiva came to be called as Maleesar. There is shrine for Lord Chozheeswarar with his consort Thirupurasundari, believed to have been worshiped by Chola King Paranthaka Chola, in the temple premises.
There is a shrine for Kalyana Vinayakar in the temple premises. Ladies worship him for 1 I consecutive Mondays to get relief from obstacles, including marriage proposals. There are shrines for Nalvar, Bairavar, Saneeswarar, Navagrahas. Chandran and Surya can be seen in the prakaram. Theerthams associated with this Temple are Mahamaha Theertham, Potramarai Tank and Soma Theertham.
Sthala Vriksham is Vilvam tree. It is believed that in the year 1964.100 devotees undertook the task of writing the five holy letters (Panchakshra Mantra – Shivaya Nama) one lakh time each thus making a total of one crore.They bound each such book and preserved it in a box which can be seen even now.

As Moon and Jupiter worshipped Lord Shiva in this temple, Mondays and Thursdays have huge crowd in the temple. Praying in Lord Nataraja shrine, brings the devotee progress in his trade and promotions in job. Ladies worship Kalyana Vinayagar Shrine for 11 consecutive Mondays to get relief from obstacles, including marriage proposals. Devotees offer garlands of Arugampul (a grass variety) as their prayer commitment.

How to Reach Someswara Swamy Temple?