🛕 Sri Sridhara Ayyaval Mutt is a Hindu mutt, located in Thiruvisainallur Village near Kumbakonam Town in Thiruvidaimarudur Taluk in Thanjavur District of Tamil Nadu. The mutt was established by a Saivite saint Sridhara Venkatesa Ayyaval who lived and preached here in the late 17th century CE.

🛕 The trinities of Dakshina Bajan Sampradaya Sri Bodhendra Swamigal, Sri Sridhara Ayyavargal and Marudhanallur Sri Sadguru Swamigal publicized that Nama Sankirthana is the simplest form of worship of Lord, attain salvation in this Kaliyuga. Sridhara Ayyaval was born in Mysore. His name was Sridhara Venkateswara Shastrigal but respectfully addressed as Sri Ayyaval. His father Lingarayar was working under the Mysore Kingdom. Sridhara Ayyaval was offered with Dewan post in Mysore Kingdom after his father death but he refused the offer due to his devotion to Lord Shiva. He undertook religious Yatra and visited various places.

🛕 When he came Trichy, a Vaishnava Nayagar was ruling Trichy and few Brahmins, who were jealous of Ayyaval informed to the King that Ayyaval was preaching Shaivism. The King wanted to test Ayyaval by himself. Hence, he dressed Lord Shiva of Rockfort temple as Krishna and arranged for a street procession. Ayyaval on seeing Lord Krishna sang the Krishnathvasa Manchari sthothram. The King was very happy seeing his unconditional love towards Lord Krishna without any discrimination. He further saved a child from death during his stay in Trichy.

🛕 The King requested Ayyaval to stay permanently in his Kingdom but Ayyaval didn’t want to end up in Trichy. He left Trichy same night itself. He travelled to many places like Thanjavur, Kumbakonam, Thirubhuvanam, Thirunageswaram and finally reached Thiruvisainallur. He settled in Thiruvisalur in an Agraharam established by Shahaji, the then ruler of Thanjavur. Once, Sridhara Ayyaval was preparing to conduct a Sradha for his ancestor. Sridhar Ayyaval was returning from Cauvery after his oil bath and saw a hungry person was about to die because of starvation.

🛕 Ayyaval brought the person to his house and offered the food, that was meant for Sradha. As the food meant for Sradha should not be offered to other people till the ritual was over. He then did the purificatory rituals as per vedic rules, cooked Sradha meals again and invited the Brahmins. The Brahmins refused to participate in his Sradha and excluded him from the caste. Sridhara Ayyaval, then completed the Sradha by placing the Koorchams in place of the Brahmins and completed the Sradha. It is a practice allowed when a person conducting Sradha did not able to get brahmins.

🛕 When the next year Sradha approached, Sridhara Ayyaval was unable to convince the Brahmins despite several requests. Then he asked for some remedy for his act and the Brahmins suggested to take a bath in Ganga to cleanse himself off from the sin. As only few days left, it was impossible for Ayyaval to take a dip in Ganga. He proclaimed that he will bring Ganga to the well at his house itself. The Brahmins laughed at him and expected that he will just take a dip in the well water and say that the Ganga was present in the well. But Sridhara Ayyaval stated that he will bring the Ganga to the well to the acceptance and full view of everyone, but no one believed.

🛕 Then Ayyaval went to the well in his house and sang the hymns of Gangashtakam. The Ganga flowed out from the well to the Agraharam street and the whole village. The Brahmins understood their mistake and requested him to stop the Ganga from flowing out immediately. Ayyaval sang a hymn and requested the Ganga to stay in the well permanently for the benefit of the people. This incident took place on the New moon day of the Karthigai month. Sridhara Ayyaval is reported to have vanished after entering the sanctum sanctorum of Thiruvidaimaruthur Mahalingeswarar Temple.

🛕 This is a small Mutt established by Sridhara Ayyaval. There is a photo of four saints Sri Sridhara Ayyaval, Sri Bodhendra, Sri Marudhanallur Swamigal and Sri Brahmendral on top of the Viswanatha mandapam. There is dining hall called Annapurna hall in the Mutt. The mutt also organizes philanthropic activities and holds pujas during major Hindu festivals.

🛕 Prabodhanam, Parayanam, Nitya Pooja, Naama Sankirthana, Dolothsavam, Ekadashi Divya Namam Bhajan, Mahanyasa Rudrabhishekam on Amavasyas are conducted here. Every year on the New moon day of Karthigai month around 10,000 people throng the madam and take a dip at the well. 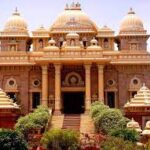