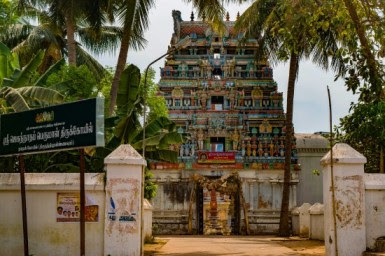 Thiru Nandipura Vinnagaram Temple is a Hindu Temple dedicated to Lord Vishnu, located in Nathan Kovil, a village in the outskirts of Kumbakonam in Thanjavur District in Tamil Nadu. Nathan Koil is one of the Vaishnava Navagraha Sthalams around Kumbakonam. It is associated with Chandran (Moon).The Only Divya Desam named after Nandi, Lord Shiva’s Vehicle. As this temple resembles the Puri Jagannatha temple, it is also known as Dakshina Jagannatham.
The temple is revered in Nalayira Divya Prabandham, the 7th — 9th century Vaishnava canon, by Thirumangai Azhwar in ten hymns. The temple is classified as a Divyadesam, one of the 108 Vishnu temples that are mentioned in the book. This Temple is considered as one of the 40 Divyadesams in Chozha Nadu. It ranks 21 among the 40 Divya Desams.The temple is currently owned and maintained byVanamamalai Mutt.

As per Hindu legend, Nandi, the sacred bull of Lord Shiva, wanted to meet Lord Vishnu atVaikuntha and entered without securing the permission of the security guards (Dwarapalakas) of Vishnu.They cursed Nandi that his body would suffer oppressive heat. Nandi informed it to his lord Shiva, who advised him to do penance in Shenbakaranyam, a forest near modern-day Kumbakonam. Lord Vishnu was impressed by the penance of Nandi and got his curse relieved. Hence the place is called Nandipuram.An image of Nandi can be seen on one of the walls of the temple. All the shrines and water bodies associated with the temple are named after Nandi.

Goddess Lakshmi  Penance to get her Place in Lord Vishnu Chest

Goddess Lakshmi wanted to reside in the heart of Lord Vishnu. She undertook a penance at Shenbagaranyam facing east. It is said that the Lord appeared before her (facing west) and accepted her wishes. Devotees worship Shenbagavalli of the temple during the Tamil month of Aipasi and believe that their wishes will be fulfilled. As Mother performed penance in Shenbagaranya region, She is praised as Shenbagavalli

As per legend, Emperor Sibi was a great donor. Once, Lord Indra took a form of a hunter and Lord Agni transformed himself as a pigeon. The pigeon sought Sibi’s help and to help the poor bird, he came forward to give his own flesh equal to the pigeon’s weight to the hunter. So, he sat in the west plate of the balance while the pigeon in the east. Lord Vishnu, originally faced the east, turned westward to look at King Sibi saving a bird by providing flesh from his thighs and blessed the King with his darshan.

As this temple resembles the puri jagannatha temple, it is also known as Dakshina Jagannatham.
The Temple was believed to be built by the Pallava King Nandivarman. The temple is currently owned and maintained by Vanamamalai Mutt.

This is a west facing temple with 5 tiered Rajagopuram. Since Nandi got relieved of his curse here, the names of the temples bodies are named after Nandi; the temple tank is called Nandi Theertham, the place called Nandipuram and other water body as Nandi Pushkarini. The main sanctum houses the image of the presiding deity, Srinivasa Perumal / Nadanadhan. He is in a sitting posture, with sword, bow, chakram (discus), Sangu (conch) and Dhandam (stick) in his hand, under the Mandara Vimanam facing west. He is flanked by Sridevi and Bhoodevi.
The metal image of the festival deity, Jagannatha /Vinnagara Perumal is also housed in the sanctum.The temple is a symbol of unity between the two sects of Hinduism, namely, Vaishnavism and Saivism and Nandhi the sacred bull Shiva and image of Brahma are depicted in the main sanctum. There is a separate shrine for Shenbagavalli Thayar. Sthala Vinayakar is Siddhi Vinayakar. Sthala Vriksham is Shenbaga tree. The rectangular walls around the temple enclose all the shrines and some of seven water bodies associated with the temple.
The temple is maintained and administered by the Vanamamalai Mutt. Nathan Kovil is where Kaliyan Vanamamalai Ramanuja Jeer, the 20th Jeer of Vanamamalai Math, attained Samadhi. His Brindavanam has also been erected near the temple. The idol of Lord Lakshmi Narasimhar, worshipped by Vanamamalai Jeers, is also installed in a temple nearby and pujas are performed every day.

The temple priests perform the pooja (rituals) during festivals and on a daily basis. As at other Vishnu temples of Tamil Nadu, the priests belong to the Vaishnavite community, a Brahmin sub-caste. The temple follows the Thenkalai sampradaya and agamas of South Indian Vaishnavism. The temple rituals are performed six times a day: Ushathkalam at 7 a.m., Kalasanthi at 8:00 a.m., Uchikalam at 12:00 p.m., Sayarakshai at 6:00 p.m., Irandamkalam at 7:00 p.m. and Ardha Jamam at 10:00 p.m.
Each ritual has three steps: alangaram (decoration), naivethanam (food offering) and deepa aradanai (waving of lamps) for both Srinivasan and Shenbagavalli. During the last step of worship, Nadaswaram (pipe instrument) and tavil (percussion instrument) are played, religious instructions in the Vedas (sacred text) are recited by priests, and worshippers prostrate themselves in front of the temple mast.

There are weekly, monthly and fortnightly rituals performed in the temple.Two festivals are celebrated every year in the temple. Pavitrotsavam is a festival organised in the temple by Karimaran Kalai Kappagam of Triplicane, Chennai, every July. The festive images of the deity are taken out in procession and special poojas are performed during the occasion.The Fridays during the Tamil month of Aipasi are believed to be auspicious to worship Shenbagavalli.Vaikuntha Ekadasi is devotionally celebrated in the temple in December-January. Prayers
People pray for timely wedding, reunion of couples separated for some reason or other, child boon, favorable court verdicts in litigations and cure from neurology problems. Devotees believe that their wishes would be granted with their participation in the abishek to Mother on Aipasi Fridays. Sri Sooktha Homam is performed here on the Shukla Paksha Ashtami days. Performing this Homam on eight consecutive Shukla Paksha Ashtamis will result in the devotee being blessed with prosperity, fulfillment of desires and overall happiness. Devotees perform Thirumanjanam to Perumal and offer vastras.