🛕 The Thiyagaraja temple at Thiruvarur is one of the ancient heritage sites of India and is a representation of the religio-socio-cultural history of the Tamil region for a period spanning over a millennium and a half. Little is known about this shrine to much of India.

🛕 Located near Thanjavur in Tamilnadu, Thiruvarur is an ancient shrine steeped in mysticism. It is rich in legend, history and tradition.

🛕 Trace the history of Thiruvarur through insights gained from the Tevaram hymns, temple inscriptions and other sources.

🛕 Vanmikanathar represents the Moolavar while the shrine dedicated to Thiyagaraja is the better known shrine in the temple. The Vanmikanathar Legend relates to Shiva appearing within an anthill in response to prayers from the Gods.

🛕 Legend has it that the Thiyagaraja (Somaskanda) image at Thiruvarur was created and worshipped by Maha Vishnu. Somaskanda is symbolic of fertility, of royal lineage etc.

🛕 The Thiyagaraja Shrine at Thiruvarur is steeped in mysticism. Thiyagaraja is associated with the Ajapaa Natanam.

🛕 Lord Thiyagaraja is said to have raisen from the navel of Lord Vishnu. Lord Vishnu in his yoga stage breaths, and when Adisesha also breaths, there are waves found in the parkadal, the milky ocean at the vaikuntha, where Lord Vishnu resides.

🛕 The valorous Chola king brought back from Indra 7 images of Somaskanda.

🛕 This causes tilting and lord Thiyagaraja is always visualised like doing a rhythmic dance which is known as “Ajaba Natanam”. Whenever, the lord moves from vasantha mandabam to the chariot or to the thousand pillar mandapam to give dharsha to his bhakthas.

🛕 Devaram hymns dedicated to Thiruvarur describe festivities in the temple town during the 1st millennium CE. 62 of the Nayanmaar preceding Sundarar are mentioned in Tiruttondattokai.

🛕 The vast temple complex at Thiruvarur with several shrines has many spacious mandapams and towering gopurams.

🛕 Nilothpalambal Inside the main temple there is another seperate shrine for Goddess Nilothpalambal. The Goddess,with two hands is Aadi Parasakti.Alongside the Goddess,an assistant is seen carrying on her shoulder Lord Muruga- an interesting feature-and the Goddess is shown touching the head of Lord Muruga.

🛕 There was a Chola king who ruled Thiruvarur by name Manuniti Chola. Once his son, when riding the Chariot, accidentally killed a calf on the road. As per the rules of the kindom, a bell was kept outside the palace and any one wishing to have one’s grievance attended to should ring the bell. The cow mother of the calf, pulled the bell on seeing the dead calf. The king, the just ruller that he was, rode the chariot over his son. Pleased with the king’s sense of justice, the gods are set to have revived.

🛕 Syama Sastri (A. D 1762 – 1827) He excelled in composing songs in Anandha Bairavi ragam. Rare ragas like Chinthamani, Manjee are identified in his some of 300 Kiruthis (a musical form of short lyrics with excellent ornamentation). “Viloma Sappu” a kind of tala, was introduced by him. All his songs are in Sanskrit and Telugu.

🛕 Syama Sastri’s actual name was Venkata Subrahmanya. But he was affectionately called Syama Sastri. At the age of seven, his Upanayanam was performed. He was taught devotional songs, given sound education in Sanskrit and Telugu. He used to accompany his father to the temple. Gradually his faith in the Goddess grew. Finding his aptitude for music, his mother requested her cousins to teach him the fundamentals of music. Within a short period, the boy became proficient in it.

🛕 When Syama Sastri was 18, his father settled down at Thanjavur. A sanyasi, Sangita Svami, an Andhra brahmin, came to their house from Banares. He was pleased with the talents of Syama Sastri and offered to be his guru. After teaching him the mysteries underlying the raga and tala prastaras, he directed Syama Sastri to go to Paccimiriyam Adiyappayya.

🛕 Once, Kesavayya, a great musician from Bobbili, came to Thanjavur and challenged the court musicians in handling intricate talas. Syama Sastri had to face him. He entered the temple and stood in deep meditation.

🛕 He sang “Devi brova samayamide’ meaning “Devi! now it is the time for you to protect me”. Later he gained confidence and went to the court to face the contest and defeated the challenger.

🛕 Muthuuswami Dikshitar and Syama Sastri were good friends. They often met and spent hours together singing. Syama Sastri had deep regard for Thiyagaraja.

🛕 Once Syama Sastri was singing Brhadamba in Pudukottai, an elderly saint was pleased and directed him to go to Madurai and sing in praise of Meenaksi Amman and receive her blessings. Syama Sastri decided to do so and composed “navaratnamalika’ (nine kritis)

🛕 Thiyagaraja(A.D 1767-1847)Standardization of Sangathis(singing a lyrical structure in different styles) in kirthanas is reported to be his main contribution. Incorporation of folk and western into karnatic is a notable contribution as revealed by one of his biographers. His “Pancharathna Kirthana” (song consisting of 5 Ragas) is a great masterpiece. Rare ragas like “Navarasa Kanada”,”Vijaya Shree” and “Bhahudari” were brilliantly handled by him.

🛕 The life and work of Tyagaraja, the bard of Tiruvayyaru, is a miracle of miracles.

🛕 The life and work of Tyagaraja, the bard of Tiruvayyaru, is a miracle of miracles. For no musician, with exception of Purandaradasa, revolutionized and gave direction to Indian music as he did. So creative a musician and saint was he that he has come to be known as Sri Tyaga Brahmam, which is a reference not only to his creativity but carries with it a part of his father’s name, Ramabrahmam.

🛕 The bulwark of a great culture, the Vijayanagara Empire, with all its glory, fell at the end of the 16th century. The invasion from the North brought in its wake new, though not always commendable, trends in living. Quite a few Hindu families had to flee to Southern areas which were still peaceful.

🛕 Many found shelter under the benign rule of the Nayakas and the Maratha kings of Tamilnadu. Particularly, a number of Telugu families went South and formed nuclei of art and culture and Tyagaraja’s ancestors belonged to one such stock, as he describes himself as descending from the Kakarla family (Kakarla is a village in the Kurnool District of Andhra).

🛕 Tiruvarur in the Tanjavur district of South India is a small hamlet; it is small in size, but has great sanctity hallowed by the memory of the three composers, the Trimoorty, of Karnatak music.

🛕 Muthusamy Deekshidar (A.D 1776-1835) He followed his own unique 72 melakartha system, and composed his kirthana in 35 Tala system. He is famous for his social kirthanas. He introduced new rich aesthetic components into Carnatic music. His compositions were in Telugu, Sanskrit and Tamil.

🛕 Dikshitar’s songs bring in a mood of meditative devotion of sublime nature which transcends words and feelings.

🛕 Dikshitar was probably the most complete classical composer and one of the most versatile men world has ever seen.

🛕 Abishekam is not performed to Lord Thiagaraja but to the Maragatha Linga (precious emerald Linga known as Veedhi Vidanga Linga believed to have been worshipped earlier by Indira) at 8.30 a.m., 11.00 a.m. and at 7.00 p.m. each day.

🛕 After the abishek is over, the Linga would be placed in a silver box with flowers and covered by a silver vessel. This will be then locked in the presence of officials and placed on the right side of Lord Thiagaraja.

Margazhi Tiruvadhirai in December-January,
Lord Thiagesar granting His Feet darshan – Pada Darshan;
10 day Panguni Uthiraim in March-April with the flag hoisting on the Hastha Star Day of the previous Tamil month Masi,
with car festival on the 10th day with the significance of the darshan granted to sage Vyakrapada;
10 day Aadi Pooram in July-August;
the Bhoodha Ganas carrying paddy bags to Saint Sundararar on Masi Magam Day in February-March;
Chithiria festival in April-May are the important festivals of the temple.
Besides the above, the Pradosha Puajas are devotionally performed drawing huge crowds.
Deepavali, Pongal the Makar Sankranthi, Tamil and English New Year days are also observed with special pujas.
Thiyagaraja Swamy Temple Chariot Festival
Kulothunga Chola II (1133–50 CE) enlarged the temple ritual to have fifty six festivals, some of which are followed in modern times. The annual chariot festival of the Thygarajaswamy temple is celebrated during April – May, correspondong to the Tamil month of Chitrai. The chariot is the largest of its kind in Asia and India weighing 300 tonne with a height of 90 feet. The chariot comes around the four main streets surrounding the temple during the festival. The event is attended by lakhs of people from all over Tamil Nadu. The chariot festival is followed by the “Theppam”, meaning float festival.

🛕 Tiruvarur is linked by rail and road from important places of the state. The temple is in the heart of Tiruvarur town and is easily reachable. 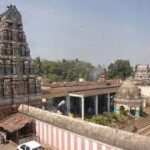 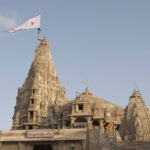 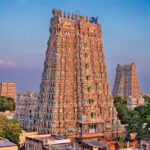