🛕 Umai Andar Temple is a Hindu Cave Temple dedicated to Lord Shiva located at Thiruparankundram at outskirts of Madurai City in Madurai District of Tamil Nadu. Presiding Deity is called as Umai Andar / Arthanareeswarar. The temple is situated on Tiruparankundram hills, standing on the Girivalam path of the Subramanyaswamy Temple, attracts good number of people during the weekends. The Cave temple is situated back side of the famous Thiruparankundram Murugan Temple. The area around this Temple is also commonly called peacock garden because hundreds of peacocks live here. This area is protected area under ASI and declared as historically important.

🛕 This Temple is supposed to be the original Thiruparankundram where Tamil Sangam Poets like Nakkeerar lived in caves and were doing penance to receive many boons from Lord Shiva. The evidence of one of the earliest Jain religious practice here in Madurai is seen in the Brahmi inscriptions found on temple walls. The temple even served as a monastery. As the Digambara Jains spent most of their time in penance leading a secluded life, the rulers respected their feelings and made necessary arrangements for them to live on the hills. This can be found from in ancient inscriptions on the Mangulam and Arittapatti sites. They also mention King Pandian Nedunchezhian who helped the Digambara Jains to settle down.

🛕 This Cave Temple is protected by the ASI. This Pandya temple was probably a 1st Century Jain cave, which was later converted, according to the rock inscriptions near a tree. It, apparently, served as a monastery for the Jain saints who lived in these hills. More inscriptions refer to the 13th Century Pandya ruler, Maravarma Sundara Pandian reign (1216-1238), and it says that a Saiva Saint Prasanna Deva, under the patronage of the king, converted this Jain monument into a temple and named it as Sundara Pandian Eswaram Temple after the monarch.

🛕 The Temple, now called as Umai Andar Koil (with Lord Shiva in the form of Arthanareeswarar) by the locals, was originally a Jain Cave Temple dating back to first century B.C. The temple has a long central mandapam (hall) and with the Sanctum Sanctorum of God Umai Andavar on the left. A small flight of steps takes you up the mandapam or the hall which has some ancient sculptures.

🛕 There is Nataraja and his consort Sivakami (both these sculptures are now in dilapidated condition) flanked by Lord Murugan with his consorts Deivayanai and Valli, Bhairava, Ganesha and the three Saiva saints, Thirugnana Sambandar, Thirunavukkarasar, Sundarar are sculpted on the outer walls.

🛕 Sambandhar is standing on a small pedestal (Peedam) which is a special privilege given to him as he was the person who took off Jainism from Madurai and introduced Saivam after rescuing the king Koon Pandiyan from severe ailment (in Tamil, Veppu Noi) by singing the song Mandiramaavadhu neeru. Manikavasagar statue is in sitting position (Suhasanam, means relaxed position) in order to give comfort to him as he has hailed from Madurai.

🛕 A small statue of Karaikkal Ammaiyar, one of the celebrated woman Nayanmar can be found near Natarajar statue. Figures of two more Saiva saints are also there, one of them perhaps being that of Prasanna Deva. Pandiyan Well (Pandiyan Kinaru in Tamil) is present near to this cave temple.

🛕 The rock engravings of a papal tree found right on top of the bass-relief of the deity proves that this place was a Jain cave temple. The Lotus medallion symbols present on the pillars of cave ascertain this cave was originally a Jain cave. The Thenparankundram site has been declared a protected monument and is now under the control of the Archaeological Survey of India.

🛕 There is a bus stand with bus services connecting Thiruparankundram with other parts of Madurai and adjacent villages. Buses are available from Madurai Periyar Bus Stand. All the buses moving from Periyar Bus Stand to Thirumangalam go through Thiruparankundram. Frequent bus services are available from in and around Madurai. Route Nos. 5, 14, 22, 48, 49 and 52 from Periyar bus stand & Mattuthavani Bus stand covers Tiruparankundram. Also, Mofussil buses heading towards Kanyakumari, Nagercoil, Tirunelveli crosses here which seldom stops. 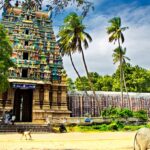