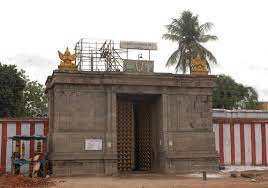 Vaikuntavasa Perumal Temple is a Hindu Temple dedicated to Lord Vishnu located in the neighbourhood of Koyambedu in Chennai City of Tamil Nadu. This temple is situated on the banks of river Cooum at Koyambedu. Presiding Deity is called as Vaikuntavasa Perumal and Mother is called as Kanagavalli Thayar. This temple also dates back to the period of Kulothunga Chozhan III.
This Temple along with Kurungaleeswarar Temple are called as Twin Temples of Koyambedu. A perfect example of Shiva-Vaishnava unison, both these temples are located adjacent to each other and very near to the Koyambedu Bus Terminus. Both have legendary connection to the Ramayana.

After ascending the throne in Ayodhya, Sri Rama came to know that some of his subjects spoke ill of Sita’s fidelity and immediately ordered her to be sent to forests though she was pregnant. Mother was taken care of by Sage Valmiki where she gave birth to the twins Lava and Kucha. During this period, Lord Sri Rama conducted the Ashwamedha Yaga. The Horse dedicated for the Yaga came to Lava-Kucha’s place. They captured the Horse. Shatrughna, youngest brother of Lord Rama demanded the boys to release the horse. They refused.
In the war that followed, the boys defeated Shatrughna. Even Lakshmana, who came then to release the horse was also defeated by Lava and Kucha. Surprised Lord Rama sent a messenger to the forest to invite Sage Valmiki, Sita and the boys. Sita was so happy to see her Lord again. Sage Valmiki explained the story to the boys that Lord Rama was their father and the circumstances that caused the separation.
Sage Valmiki begged the pardon of Rama for his disciple boys. Lord Rama granted darshan to the sage as Vaikuntavasa. As requested by the Sage, Lord stayed in this place as Vaikuntavasa in this place. To support the stay of Sage Valmiki here, there is an anthill in the prakara of the temple. Lord Kurungaleeswarar, worshipped by Lava-Kucha is nearby.

When Lord Sri Rama took Sita to Ayodhya, Mother thought that she has come to this place and her Lord Rama was in her eyes, hence the place has the name Raghavapuri.

The name of the place Koyambedu is derived from the story that Lava-Kusa tied the Ko, the horse of Sri Rama with Ayam (iron) fence – Ko-Ayam-Pedu. Ayam is iron and Pedu the fence.

This east facing Temple is a much smaller temple compared to the Kurungaleeswarar Temple. There is no Rajagopuram, but beautiful Dasavathara images are found at the main entrance. There are many beautiful sculptures all around the temple. Dwajasthambam, Garuda and Palipeedam are at front on the outer prakaram facing towards the sanctum. Idols of Valmiki, Lava & Kusa, Seetha in Maravuri and Alwars can be found in the Mahamandapam. Daily pujas are performed to sage Valmiki.
Presiding Deity is called as Vaikuntavasa Perumal and is facing east. Generally, Vaikuntavasa will be seen in a sitting pose but here he is seen in a standing posture with his consorts Sridevi and Boodevi. The main deity is being decorated differently on every Saturday. The Utsavar is known as Azhagiyasingar and there is an unconfirmed report that the Thelliyasingar deity in the Parthasarathy Temple at Tiruvallikeni, was kept here during the alien invasion or due to some riots in the area.
The Utsavar is found flanked on either side by Sridevi and Bhoodevi. The Utsavar images of the Goddess, Andal, Sudarsana, Azhwars, Vishwaksenar and Ramanuja are also worshipped here. Procession deity appears inviting the devotees by his left hand and blesses with the right. As he is all graceful to the Devotees, he is called Bhaktavatsala – blessing the devotees. It is believed that the tower of the temple is as the shadow of the Lord, hence called Chaya Vimana-Shadow Vimana.
This temple is also famous for its shrine for Sri Rama and Sita Devi. Sri Rama and Sita are found just outside the sanctum unusually on normal clothing instead of being dressed like King and Queen. Lord Rama does not appear in his Royal robe but in stark a dress made of plant stems and leaves, a rare form. Sri Lakshmana and Sri Anjaneya are seen with Lord Rama in Vishnu temples. Here only Rama and Sita are in the temple. Later, a temple was built for Sri Anjaneya on the banks of Lava-Kucha theertha.
Sita Devi is seen on a regular Saree with her hair do (called Kodaali Kondai) as an ordinary woman. It is made to signify their posture when they spent 14 years in the forest. In another place, Sita Devi is also seen as a pregnant woman, as she gave birth to Lava and Kusa at Sage Valmiki’s Ashram, after She was exiled to forest. Stucco Images of Lord Rama fighting with his sons Lava and Kusa can be found in the Mukha Mandapam.
Mother is called as Kanagavalli Thayar. Goddess Kanagavalli Thayar is present in a separate shrine on the outer prakaram at the southwest side of the temple. Goddess is so beautiful, decorated with all Her ornaments. Sri Andal shrine is located at the northwest corner of the temple. Sage Vaikasana, author of Vaikanasa puja codes has an illustrious place in the prakara. There is a separate shrine for Anjaneyar at the opposite side of the temple and by the side of 16 Pillar mandapam of Shiva Temple, where Anjaneyar is seen facing west towards the temple.
There are 3 trees uniquely grown very close to each other. There is one Vilvam tree between 2 neem trees on its either sides. It is said that Vilvam signifies Lord Shiva and one of the Neem tree represents Sri Parvathi and another Neem tree signifies her brother Lord Vishnu. It is believed that it is like the wedding posture of Lord Shiva where Lord Vishnu presides over their marriage by joining their hands together. A Vilvam and Neem tree inside a Vaishnavite temple is a very rare sight. Sthala Vriksham is the pipal tree.
The Theertham for this temple is ‘Lava Kusa Theertham’ which is believed to have been created by the two sons of Lord Rama. The same tank serves as Theertham for Kurungaleeswarar temple, which lies just adjacent to this temple. There is an ancient manuscript of the Ramayana in Telugu letters and its title is Vaithya Ramayana and it is well preserved.

Married women pray to Lord for children of knowledge and wisdom. Those who had committed wrongs knowingly get relief from such sins. Unmarried women pray on Tuesdays with a Mangal Sutra tied to the Parvathi Swayamva tree. People develop the quality of sacrifice, tolerance and selflessness assuring family prosperity when they worship in this temple where Mother Sita stayed. Devotees offer Sari (Vastra) and perform abishek to the mother on realizing their prayers. Those suffering from the wrath of ancestors are advised to worship both Lord Shiva and Lord Vishnu in the temple, bathe in the Kuchalava theertha, perform pujas and Tarpan for the ancestors.

The Temple is located at about 400 meters from Rohini Theatre Bus Stop, 600 meters from Koyambedu Metro Station, 1.5 Kms from Koyambedu Chennai Mofussil Bus Terminus, 4 Kms from Vadapalani Murugan Temple, 5 Kms from Nungambakkam Railway Station, 8 Kms from Egmore Railway Station, 10 Kms from Chennai Central Railway Station and 17 Kms from Chennai Airport.
Koyambedu is well connected from all parts of the city by bus. If you are coming from Tambaram side, you have to cross the CMBT Bus Terminus and take a left just opposite to the Nathella Sulochanamma Kalyana Mandapam. If you are coming from the other side, the temple is on the first right turn opposite to the Kalyana Mandapam once you cross the flyover.
The temple is located very near to the Koyambedu Bus Stand and you can reach this place very well either in auto/taxi or by public transport. The temple adjoins the area north of the Koyambedu Market and can be accessed from the outer ring road just after crossing the signal junction after the bus terminus towards the Bangalore highway. Nearest Major Railway Stations are located at Chennai Central and Egmore. Nearest Local Railway Station is located at Nungambakkam. Nearest Airport is located at Meenambakkam. 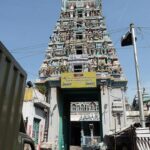 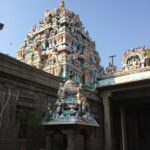 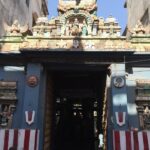