🛕 Veyil Ugandha Vinayaka Temple is dedicated to Hindu God Vinayaga located at Uppur in Ramanathapuram District of Tamilnadu. This Place is also called as Uppur Chathiram village. It is also called as Lavanapuram. “Lavanam” in Sanskrit means Salt. It is located at a distance of 85 kms from Rameswaram. It is believed that Lord Ram worshipped Vinayagar (Elephant God) in this very temple on his journey to Sri Lanka.

🛕 The rays of Sun fall on the Lord on the southern side during Dakshinayana and on the northern side on Utharayana periods. Uppur Vinayaka temple is 15 km from Thondi in Thiruvadanai Taluk in Ramanathapuram district on Sethu Beach road.

🛕 Many reasons are attributed to the raising of this temple. On story goes that king Daksha expected Lord Shiva who married his daughter Dhakshayani to obey him. With a view to humiliate the Lord, Daksha organized a great Yagna and invited all those of the celestial world and rishis except Lord Shiva. Exasperated by the brute behaviour of her father Daksha intentionally aiming to insult her Lord, She came to the place of Yagna. Daksha insulted her also. Shiva sent Veerabadra to destroy Daksha’s yagna.

🛕 Sun was one among the participants in the Yagna and was punished. Sun came to earth to seek remedy for his folly. He came to Vannimandhara vanam on the Devipuram, Kalipuram, Thiruppunavayil and other places on the eastern coast and performed penance on Lord Vinayaka. Pleased with Sun’s penance, Lord Vinayaka graced him from the sins he accrued. Sun prayed to Lord Vinayaka to grant the same grace to all people. Lord Vinayaka also granted Sun the boon that his rays would fall on him when he worships. As Lord Vinayaka accepted Sun’s rays on him (sun rays – Veyil in Tamil) He is named Veyil Ugandha Vinayaka.

Different Names of this Place

🛕 Sun performed penance here, attained siddis (powers) and was relieved of some adverse aspects on him. Hence, the place is also known as Suryapuri, Thavasiddhipuri (attaining powers through penance) & Pavavimochanapuram (place where sins disappeared). As there were Vanni and Mandhara trees in plenty, the place is also known as Vanni Mandhara Puram.

Rama worshipping Vinayaga of this place

🛕 When Rama came to know about the place of captivity of Sita through Anjaneya, He set out from Prachravana hills with his monkey army to Vanni forests through the eastern coast. He worshipped Veyil Ugandha Vinayaka in a serene environment and sought his blessings for victory in his efforts and proceeded towards Sethukarai.

Vinayaka appearing in the dream of a priest

🛕 Though stories differ, it is believed that the temple was built by King Bhaskara Sethupathi in the year 1905. The story also goes that Lord Vinayaka appeared in the dream of a priest asked him to build a temple without roof on the Sanctum Sanctorum so that he can enjoy sunlight forever. Because of this design, Sunrays fall on the deity on the southern side during the Dakshinayana period and on the northern side during the Utharayana period.

🛕 Vinayaka Chathurthi is grandly celebrated in the temple.

🛕 Devotees pray to Lord Vinayaka for removal of obstacles in marriage talks, for child boon and for excellence in education. People perform abishek and offer vastras-clothes to the Lord. 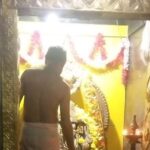 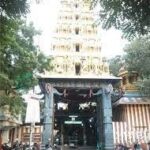 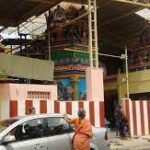