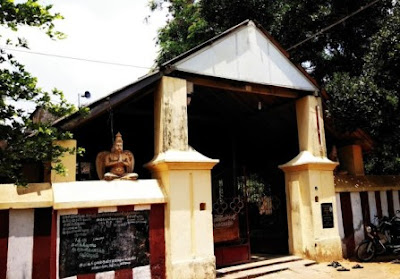 Yoga Narasimha Swamy Temple is a Hindu Temple dedicated to Lord Vishnu Shiva located in Narasinganpettai in Thiruvidaimarudur Taluk in Thanjavur District of Tamil Nadu. The Temple is situated on the banks of Veera Cholan River. This Temple is famous for Kariya Siddhi Anjaneya Shrine in its premises.

As per legend, Lord Vishnu was afflicted with Brahmmahathi dosha for killing Hiranyakasipu. He meditated on Lord Shiva at Suyambu Natha Swamy Temple here to get relief from Brahmmahathi dosha. Hence, Narasimha can be seen sitting in meditative posture in this temple. Hence, the place came to be called as Narasimhapuram and later got corrupted to Narasinganpettai.

The Temple is believed to be around 1000 years old and extensively renovated byVijayanagara Kings.
This Temple is facing towards east. The Sanctum Sanctorum consists of Sanctum, Ardha Mandapam, Maha Mandapam and Mukha Mandapam. Presiding Deity is called as Yoga Narasimha Swamy and is facing east. He is housed in the sanctum seated in Yoga (meditative) posture. He is four armed holding Shanka and Chakra in two hands and other two hands are in Yoga Mudra. Utsava Idol is Prahalada Varadar with Sridevi and Bhoodevi.
Garudalwar can be seen in front of the sanctum. There is a shrine for Kariya Siddhi Anjaneya in the prakaram.There is unique practice of offering coconuts to Anjaneya here. Devotees need to bring the coconuts and the temple officials mark the coconut with a number, then they note the marked number in a ledger.Then, devotees lit three deepas, offer one at Anjaneya Shrine, the remaining two at Sanctum and then return to Anjaneya shrine.
The priests return the coconut to the devotee. Then, devotees need to circumbulate Anjaneya shrine with coconut for 11 times and Narasimha Shrine for 3 times. Devotees tie the coconut in the temple premises. It is believed that the wishes made during the circumbulation will be fulfilled in 11 weeks. Once, their wish is fulfilled, they need to untie the coconut and perform archana at Anjaneya shrine.
Yoga Narasimha Swamy Temple Opening Time
The Temple remains open from 09.00 to 01.00 pm am 04.00 pm to 07.00 pm.